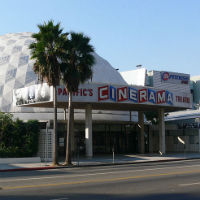 When the Cinerama Dome opened on November 7, 1963, it was the first major motion picture theater to open in Hollywood for thirty some years. It’s three-projector Cinerama process was a novelty and the giant screen that curved around the audience made moviegoing into an immersive experience. Over the years the retrofuturisic bubble at the corner of Sunset and Vine has hosted scores of swanky gala premieres and screened more than 650 films. Last night, the Dome kicked off its 50th anniversary celebration with a Raiders of the Lost Ark screening and a Q&A with Steven Spielberg. The three-week fete features a full slate of discussions with top shelf actors and directors and screenings of classic films on the space age structure’s screen.

On Friday, actress Thora Birch will chat about being covered with rose petals and ennui after a screening of American Beauty. On Sunday afternoon, How the West Was Won will show off those expansive landscapes with a gorgeous 70mm print. (The shoot-em-up was actually filmed utilizing cameras specially made for projection on the Dome’s curved screen.) Other screenings include It’s a Mad, Mad, Mad, Mad World, the first movie ever presented at the Dome, and Logan’s Run, a dystopic sci-fi flick about a world where life ends after 30. For the final screening on November 12, director Oliver Stone will discuss his presidential biopic JFK. Full schedule here.

When the Cinerama Dome opened on November 7, 1963, it was the first major motion picture theater to open in Hollywood for thirty some years. TV had stolen audiences and the Cinerama developers wanted to change that.