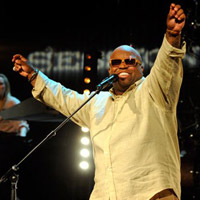 As of next week, L.A. can count one more venue to its list of live music arenas. On July 7 City Walk will debut 5 Towers, its brand new, interactive outdoor concert center, with a free concert from Cee Lo Green. Universal doesn’t do small, and we’re hearing the new stages will have an “opulent” setting—think light sculptures and massive video monitors. All of which means it might be the perfect place for a Cee Lo Green concert. After all, the MC, who has just wrapped his duties as a judge on The Voice, is likely itching to put on a big show after recently dropping out of Rihanna’s Loud Tour due, in part, to a scheduling conflict with The Voice and a minor kerfuffle with a critic on Twitter this month. And did we mention it’s free? At 8 p.m.