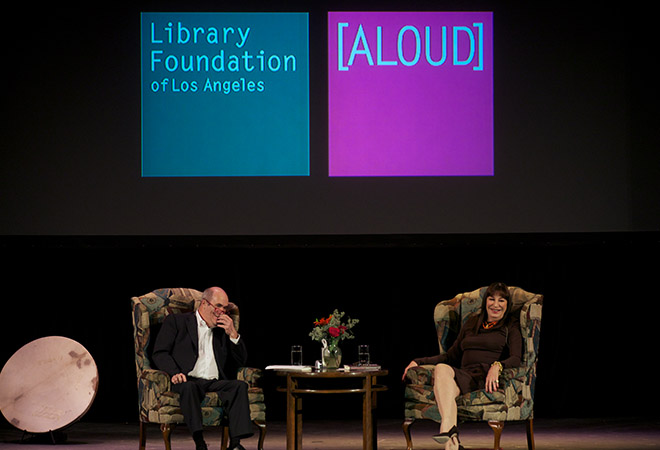 I’ve seen Anjelica Huston out and about L.A.’s social whirl for years. I always smile when I see her no matter what she’s wearing, and nine times out of ten she’s wearing a red necklace. One that I am particularly fond of has little chili peppers on it. On Monday night, she wore another red necklace to the Library Foundation of Los Angeles’s ALOUD event and may have finally explained her fascination with the color. “Growing up in Ireland everything is so green,” she said, “the color red jumps out.”

The actress and member of the legendary Huston family, chatted with another legend, Irish author Colm Toibin, while a packed house at the Wilshire Ebell looked on. This wasn’t ALOUD’s usual spot, but the theater where Amelia Earhart made her last public appearance was a good place for Huston to air her well-written thoughts. She read passages of the book, which is the first installment of a two-part autobiography (I’ll buy it), and showed home movies and photographs. Here are four other things I learned…

1. She was born while her father director John Huston was in Uganda filming The African Queen. It took a barefoot runner three days to reach him with the message announcing her birth.

2. In the ’60s Huston was close to getting the part of Juliet in Franco Zeffirelli’s Romeo and Juliet when her father wrote a letter to the director telling him that she (much to her distress) would be appearing in his picture instead. The resulting The Walk With Love Of Death was panned in the U.S.

3. When she arrived at school, she told the nuns she was an atheist. Her favorite activity – illumination (adorning books with decoration). “By the time I got to England I was really stupid. Practically illiterate,” she joked. She then spent the swinging ’60s in London hanging out with The Kinks and Mick Jagger.

4. The next installment of her memoir, Watch Me, will focuses on her years in California and comes out in the fall.