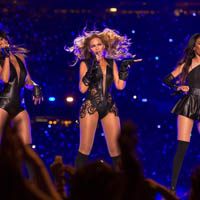 Where were you the moment Beyonce killed the lights in the New Orleans Superdome, allowing us to contemplate her insane Super Bowl performance with the reverence it deserved?

Most of us sat huddled at viewing parties, wiping guacamole from our still trembling chins, wondering whether we were physically and emotionally prepared for Big Bad Bey’s Grammy performance. Now that we’ve had a moment to let the fact of her back-to-back performances soak in, here are the top five things we think Beyonce should do to top herself on Sunday.

1. Bring Back Destiny’s Other Children
The Superdome already played host to the near-earthshattering reunion of Destiny’s Child’s three core members. But what about the rejected, long lost spawn? By now, it’s clear everything Beyonce touches turns to gold. We leave it to her to single-handedly revive the careers of former bandmates LaTavia Roberson, LeToya Luckett, and Farrah Franklin by having them join her on stage at the Staples Center — if only by hologram.

2. Unplug
Speaking of bringing back the irrelevant, what if Beyowolf went the way of MTV Unplugged? An acoustic set would defy expectations that the show will only become more extravagant. And “Video Phone” unplugged? We are, most certainly, not ready for that jelly.

3. Show off the Mr.
The announcement that Queen B’s 2013 tour would be titled The Mrs. Carter Show elicited some salty reactions from the fem blogosphere. But if her response to criticism that she lip synched the national anthem — belting out “The Star-Spangled Banner” during a Super Bowl press conference (“Any questions?”) — taught us anything, it’s that the lady doesn’t bow to haters. That’s why we’re calling for a full-on theatric satire of domesticity. Get Jay-Z on stage and take Leave It To Beaver to new diva heights. The ladies of Jezebel might collectively lose their minds.

4. Introduce Blue Ivy
Good parenting aside, Blue Ivy has to make an appearance. This can’t be an ordinary entrance for the Golden Child. Kanye West may not be the babe’s godfather (a glaring oversight on the part of the parents), but we think a tribute to his one unattainable desire is in order. Baby Blue should descend from the ceiling of the Staples Center dressed as a cherub riding atop a Persian rug. Preferably during “Halo.” It’s the best we can do for now, Mr. West. (For those unbaptized in the Church of ‘Ye, see below.) 5. Enact a Miracle
References to “dropping the mic” in casual conversation are nearing the end of their brilliance, and Beyonce is not one to come late to the game. Considering the deity-worship degree of fandom surrounding Her Royal Highness, the only way to advance the trope is for our personal Lady and Savior — the Queen of Queens, if you will — to perform a good ol’ fashioned Miracle of Christ. The L.A. River is a bit of a trek, but surely the Grammys organizers can arrange an impromptu body of water for Bey to walk out on. It would be the ultimate exit.

And then we can start preparing ourselves for her June 28 return.