Home Uncategorized 5 Questions for Tim Heidecker About his New Album 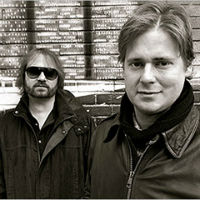 Best known as half of the outlandish comedy duo and production team behind the Tim and Eric Awesome Show, Great Job! and the subsequent Tim and Eric Billion Dollar Movie, Tim Heidecker is a particular kind of weirdo. He and collaborator Eric Wareheim share a sense of humor that’s simultaneously witty, moan-worthy, and occasionally brilliant. Last week, Heidecker returned to one of his first loves: music.

Working with friend and musical collaborator Davin Wood, he released his second album, Some Things Never Stay the Same. It sounds like the dream of an insurance salesman who’s desperate to rock. Over-the-top and mega-produced, it would fit right in at the bar in Road House. But is it a joke?

There’s nothing overtly funny about the album and it actually kind of rocks in that 1977 denim-jacket-and-a-Schlitz way. There’s high production value that recalls Ween, if the the freaked-up band decided to ride a straightened arrow. The musicianship is solid and dives so deeply into the bar band aesthetic, it’s hard to decide whether this is a self-referential attempt to recreate another era or whether Heidecker and Wood are simply crafting an homage to the music they love. Regardless, Some Things is fun. Don’t over-think it. Play it as the soundtrack to your Camaros and keggers summer vacation–even if it’s the middle of November.

We recently caught up with Heidecker to chat about music, groupie deficits, and the life of an occasional rockstar.

How is creating a comedy similar or different to making an album?
Making a show is very complicated. It involves a lot of money, people, stuff. A song is just a song made mostly just by me and/or Davin. It’s very personal. I enjoy both for different reasons.

If you could create a super-group of musicians to back up Heidecker & Wood, who would be on the roster and why?
I don’t have any idea. Hopefully good players who can learn the tunes quickly. I certainly wouldn’t want anyone more famous than me to steal the spotlight.

What items are must-haves on your tour rider?
I’m pretty easy. Just some light beer to loosen up.

What are the typical Heidecker & Wood groupies like?
I know of none that exist.