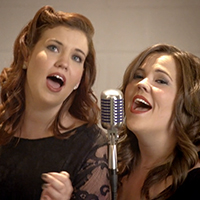 The Secret Sisters story begins with Laura Rogers travelling to Nashville to audition before music execs and returning with sister Lydia in tow. Once the execs heard the two harmonize, the duo was headed to Los Angeles to record an album. By chance, legendary producer T. Bone Burnett heard their demo and got involved in the project, executive producing their self-titled debut. It was recorded using all analog equipment, which helped shape a sound that has gained them a following among music fans who yearn for the sound of classic country and bluegrass. Last month the Secret Sisters released Put Your Needle Down, which proves that the duo’s angelic harmonies are as crisp as ever. We caught up with the sisters, who have been touring with Nickel Creek, to talk about the new album and life on tour.

The Secret Sisters will play the Wiltern tonight with Nickel Creek.

1. How is the tour going?
Really well. We’ve been having a blast. The crowds have been unbelievable. Nickel Creek fans have given us such a great response. We’ve never toured with a full band before, so this time around we added a few musicians; it has been a whole different experience for us.

2. T. Bone Burnett executive produced your debut album and this most recent one. How did that relationship come about?
With our first record we had been working with producer Dave Cobb; we were just about to release it and the label somehow let T. Bone listen to it. He loved what he heard and wanted to get involved in some way. We just let him take the reigns and he put his magical touch on everything. This time was different because we got to work with him from the very beginning. It was great in every way; we were so thankful that he still liked us and that we were able to work with him.

3. What did you draw your inspiration from on this new release?
A pretty diverse set of influences. We just sat down after the last tour and started writing anything that came to mind. I think what kind of rose to the surface was a little bit of relationship trouble. Everyone writes songs about heartbreak. I had gone through a really terrible breakup while we were making this record and I think a lot of it stems from those emotions. The musical influence came from everywhere, from all of the different styles of music that we love: gospel, bluegrass, country, rock & roll. We wanted the record to represent all those areas of music. Because of that, it’s hard for people to classify our music. They don’t know what genre we belong in; so we accomplished what we set out to do.

4. You went to Europe on your last tour. What was the audience reception for you overseas?
A lot more amplified. I think because Europe doesn’t have the rich history that we have with country music, it is a foreign concept and they are so drawn to it. They look up everything they can about it. Whenever we play shows there, our fans come up to us with articles that they read and want us to sign them; you really don’t see that here in. It’s also a much bigger audience for us there. Our album releases there at the end of May and we plan to tour there at the end of the summer.

5. Put Your Needle Down was recorded at Village Studios in Los Angeles. Any favorite L.A. spots or activities that you became acquainted with?
There wasn’t really a whole lot of downtime because we were mostly in the studio. One of our favorite places to order food from was the Apple Pan. We would order food from there every week and T. Bone would tell us, “You have to get some pie” so he would order three whole pies. It was so good that at one point I just took the entire pie pan and ate straight from the pie pan. Every now and then we’d be on our way to the studio and be like ‘Ok, we are in LA, we can eat healthy, we should order a juice, etc.’ and then we’d get to the studio and be like ‘Where’s the Apple Pan?’. We are Southerners, and we love pie and that place did it right!