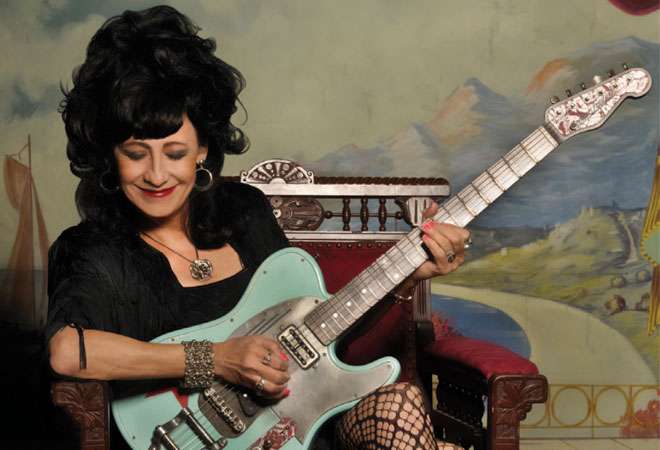 Rosie Flores has been a fixture on the rockabilly scene for years. Earlier in her career she was in the Screamin’ Sirens, an all-woman cowpunk band that had a reputation for playing energetic live shows with a party-like atmosphere. However, Rosie has been putting out solid solo material since 1987. This week her and pal El Vez, the Mexican Elvis team up for a unique holiday show, the first of its kind.

How did the Merry MeXmas show come about?
It came across as a great idea when El Vez and I had dinner in Austin. I gave him my Christmas record and I already had his. I suggested we do a show sometime. He liked the idea and we started making plans.

How long did you have to prepare for the show?
We started working on it December 7. I worked with him at his house for the week and then we added the rhythm section. We’re kinda like Donny and Marie. She’s a little bit country, he’s a little bit rock ‘n roll.

When you visit L.A. what’s on your must-do list?
I like to walk the streets of Silver Lake and do some Christmas shopping. I will probably end the day with a stop at El Chavo for a margarita and a taco.

You’ve been working on your memoir for a while. What can fans expect?
Stories of my life as a musician from age 16 to 60. It also has pictures of my candy collection. The title is Wacky Truck Stop Candy & Road Stories. The chapters are named after candies, which will be featured in photographs throughout the book. I hope to release the book in 2014. I’m just starting to talk to publishers.

What does the your 2014 calendar look like?
I will be going to Spain with Marti Brom. I’d like to put out a duet EP out with Martin in the near future. In 2014 I’m going to finish the book and get it released then start working on the new record. I am singing with a jazz quartet in Austin. I’ve also been working on surf instrumentals for a surf band. Too much to list.