Home Music 5 Questions for Foxygen, the Little Neo-Psychedelic Duo that Could 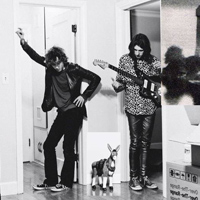 Any band that names its album We Are the 21st Century Ambassadors of Peace & Magic either takes itself way too seriously or not seriously at all. Westlake Village natives Sam France and Jonathan Rado, who formed Foxygen in high school, fall into the latter camp. With witty lyrics set to a playful, Californian psychedelic sound, Foxygen channels the effortless cool of their rock heroes the Kinks, the Stooges and the Stones as they gain notoriety for their raucous live shows. We caught up with Rado, who has been making music with France since they were kids, between the two weekends of Coachella, where Foxygen debuted a couple of new tracks.

How was the first weekend of Coachella for you?
It was pretty amazing. It was pretty scary because we were about to go on and there was no one there, but then we started, and then five seconds in there were so many people. The live show was incredible. We had a great time.

This was your first time playing. Have you attended the festival before?
I did. It was one of the first festivals I’d ever been to. My cousin took me when I was 15. The Chemical Brothers headlined. I had never heard of them before, but it was completely mind-blowing for a 15-year-old kid. I went in high school too, so I’ve been to Coachella twice. [Playing] is way different than going to the festival. It’s a different vibe on the other side of the fence.

What sorts of shenanigans ensue back there?
I don’t know; it’s crazy. They put you in these little trailers. There’s a whole artist playpen. We were next to MGMT, and that was really cool talking to them for a little bit. P. Diddy had the trailer right across from us. He was just chilling in the doorway in his underwear, which was awesome. I guess he’s Puff Daddy now. I missed so much. Beyoncé was there, but I didn’t see her. It’s a very strange environment because you’re walking around this little world where it’s just a bunch of your peers.

If you could have one Coachella hologram on stage with you, who would it be?
Maybe Todd Rundgren. But he’s alive. Ron Ashton just died from the Stooges, so maybe he could play guitar with us.