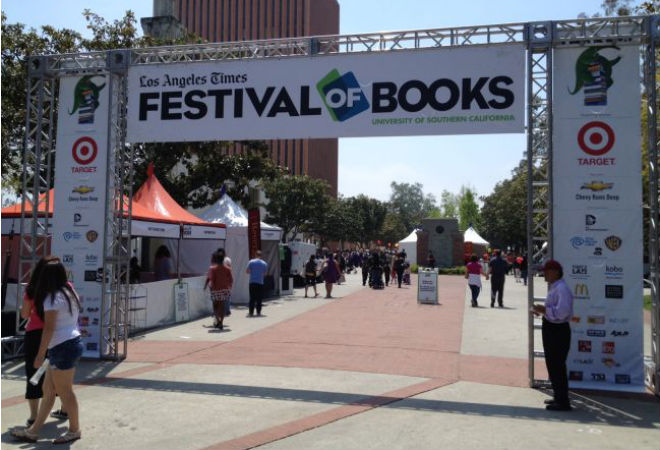 For book lovers, it’s like Woodstock—minus the mud pits, hallucinogens, and tie-dye. But there will be dancing this weekend at the Los Angeles Times Festival of Books. The 19th annual literary confab occurs this Saturday and Sunday (April 12-13) at USC where 150,000 people are expected to arrive for more than a hundred panels and readings. There are also film screenings, art installations, cooking demonstrations, and over fifteen musical performances.

Amid all the glitz and glamour don’t forget the hometown crowd. In addition to our own Steve Erickson, who will be joined on Sunday at noon by David Grand and Edan Lepucki for the Fiction: California Visions panel, here are five local authors to catch at this year’s Festival of Books.

Aimee Bender
Bender, who teaches creative writing at USC, followed up her critically acclaimed novel The Particular Sadness of Lemon Cake (2010) with last year’s short story collection The Color Master. L.A.’s reigning queen of the weird-but-tender is working at the height of her powers in her latest collection, which features stories of ugly women married to ogres who eat their children, sibling rivalry in a jungle where tigers need mending, and a life-changing sex game. She’ll be in conversation with recently announced PEN/Faulkner Award winner Karen Joy Fowler and Jeff Vandermeer at the “Fiction: Outside the Margins” panel.
Details: Taper Hall, Saturday, 4:30 p.m.

Michelle Huneven
Huneven, a former food critic for the Los Angeles Times and LA Weekly, received a Whiting Writers’ Award in 2002 and was a finalist for the 2009 National Book Critics Award. The author of four novels—the latest, Off Course, out this month from Farrar, Straus, and Giroux—is a native of Altadena and a tireless chronicler of down-and-out lives in the Golden State. Catch her on the “Fiction: Lives in Transition” panel alongside Natalie Baszile and Gina Frangello.
Details: Seeley G. Mudd, Saturday, 1:30 p.m.

Laila Lalami
Born and raised in Morocco, educated in linguistics in London and Los Angeles (she received her Ph.D. in the subject from USC), Lalami now teaches creative writing at UC Riverside. Her 2005 debut short fiction collection, Hope and Other Dangerous Pursuits, holds the unique honor of being the first book of fiction written in English by a Moroccan author to be published by a major American press. Lalami’s work offers a rare window into the world of young Moroccans struggling to define themselves against the many contradictions and prohibitions of their culture. Her third book, The Moor’s Account: A Novel, will be out in September.
Details: Salvatori Computer Science Center, Sunday, 1:30 p.m.

Douglas Kearney
CalArts’s Douglas Kearney is not only an award-winning poet but also an opera librettist. His 2009 collection The Black Automaton was selected for the National Poetry Series, and Pasadena’s own Red Hen Press published his latest book, Patter, last month. A dynamic performer—and, like Huneven, a native of Altadena—Kearney explores the valences of contemporary Black masculinity and culture at large in his work.
Details: You can catch him twice at the Festival, first on the panel “Poetry: Imagination’s Sisters: Poetic Invention and Personal Narrative” at 2 p.m. in the Annenberg Auditorium. Then hear Kearney read from Patter on the Poetry Stage at 3:30 p.m.

Matthew Specktor
With a talent agent for a father and a screenwriter for a mother, Matthew Specktor is about as L.A. as they come. Specktor himself worked in the industry for many years before, but in a reversal of the usual trajectory he switched his focus to fiction writing and published his first novel That Summertime Sound in 2009. He’s also a senior editor of the L.A. Review of Books and has been a behind-the-scenes presence in the local book world for years. With the publication of his second novel, the ’70s family epic American Dream Machine (2013), he’s poised to take center stage: The novel is being adapted into a series for Showtime by Dexter’s Michael C. Hall and Scott Buck. Catch Specktor on the “Fiction: L.A. Stories” panel, which also features Janet Fitch, whose novel White Oleander was adapted for the big screen in 2002.
Details: Seeley G. Mudd, Saturday, 3 p.m.

Demonstrators Pitch Tents at USC to Protest Displacement (and Everything Else)