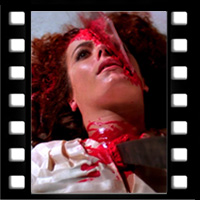 While precious natural resources like land, water, and oil helped give our city life, for film fiends celluloid is the most sacred substance of all. And Los Angeles has loads of the stuff, original prints and rare reels that other cities never get to see. Craving sanguine splashes and ear-searing shrieks? L.A.’s indie theaters will sate your cinematic bloodlust throughout the month. This week, the Halloween celebration goes into overdrive as local haunts put screams on the big screen. We’ve cataloged the a ton of macabre movie events but here are some choice cuts for this week:

Suspiria with Goblin
Monday-Wednesday, October 21-23, the Egyptian Theatre
Dario Argento’s horror classic Suspiria screens at the Egyptian Theatre on Monday night after a performance by the Italian synth rockers who scored the soundtrack. The show marks the first time the four-decades-old band has played Los Angeles. The band returns for sets on Tuesday and Wednesday that preceed 35mm screening of classic Argento movies Deep Red and Tenebrae. The dates are currently sold out but with some clever Craigslisting or string-pulling you may be able to get in. This is unmissable but if you do miss it, you can listen to Goblin on full blast while you work.

Nosferatu
Tuesday, October 22, Cinefamily
Vampires today look more like dreamy pop singers than hideous monsters. While it’s hard to say which is more terrifying, this 1922 flick exposed the legendary bloodsucker for who he was: a mangled, old man stealing the elixir of life. This gem of German expressionism was remade by Werner Herzog in 1979, who, incidentally, sounds like dracula from time to to time. Like the 1920 silent film The Cabinet of Dr. Caligari, and, later, the Tom Waits, William S. Burroughs, and Robert Wilson theater collaboration, The Black Rider: The Casting of the Magic Bullets, this film is all shadows and jagged angles, adding Modernist flair to a Victorian tale. For the Cinefamly screening, the restored hi-def transfer will be accompanied by composer Hans Erdmann’s score, which played alongside the original by F.W. Murnau in 1922.

Beetlejuice / Addams Family drink-along
Friday, October 25, Downtown Independent Theater
Boos and booze coalesce at a double feature of cult classics for the Hot Topic generation. Both films are responses to increased suburbanization and the explosion of commercial culture. Beetlejuice is really about the destruction of history, real estate development, and yuppie gentrification, likely based on Tim Burton’s experiences growing up in Burbank. Both versions of The Addams Family (the original and the 1991 movie) address the culture clash of a strange, intergenerational family that moves into a homogenized community. The flicks are also hilarious and fun, especially if you take a drink any time Lydia or Wednesday looks annoyed.

Dusk ‘Til Dawn Horrorthon
Saturday, October 26, Aero Theater
Spend all night watching movies, freaking out and eating junk food, just like you did when you were a kid. For $20 you can stay all night, juicing up on free coffee from Peet’s and energy drinks from Monster while snacking between contests and zany trailers. The lineup includes Amityville II: The Possession, Kingdom of the Spiders, The Fly, Hell High, The Car, and The Sentinel.

United States of Horror
Various dates, Cinefamily
Travel across the U.S. one terrifying state at a time. This series showcases an effed up film from various states in the nation–okay, mostly the South–with highlights including Evil Dead and the ridiculously great Chopping Mall featuring an appearance by director Jim Wynorski. Feel free to ask him why the killer robots shoot pink lasers.

Thursday, Oct. 24th, midnight – MISSISSIPPI: If Footmen Tire You, What Will Horses Do?