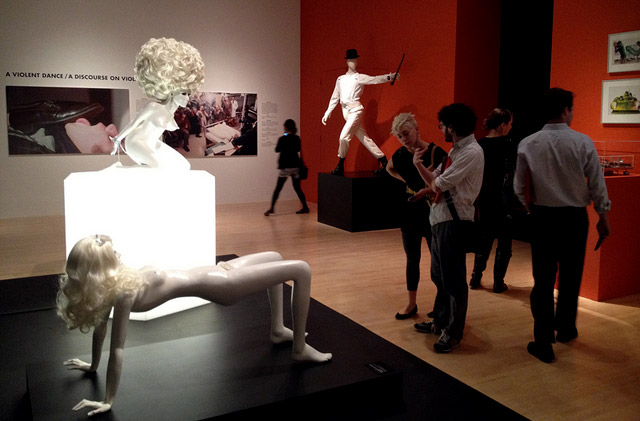 Stanley Kubrick, the massive exhibition that recently opened at LACMA and runs through June 2013, has so much eye-candy it’s hard to choose a favorite piece. There’s the feathered mask from Eyes Wide Shut and the card case for Kubrick’s epic but unmade Napoleon biopic. There are the angry letters about Lolita and the droog figurines in full costume from A Clockwork Orange. Whatever your favorites, these curios are definitely worth a second look.

1. The Starchild from 2001
Approximately three feet long, the oversized, naked baby gazing perpetually into nothingness is creepy enough on its own. Then you walk around and discover the top of its cranium comes off.

3. The typewriter from The Shining
Though he didn’t spend much time using it, the Adler typewriter that Jack Nicholson’s character pounded away at is the centerpiece of The Shining display. It’s got some stiff competition from two axes that hang ominously on a nearby wall, but you can get up close to the piece of paper emblazoned with “All work and no play makes Jack a dull boy.” (If only redrum had been smeared on the wall with red paint.)

4. Costumes from Barry Lyndon
Set in the 18th century, this rags-to-riches fable starring Ryan O’Neal as a poor Irish farmboy who eventually becomes a wealthy British aristocrat features gorgeous gowns and waistcoats conceived by costume designers Milena Canonero and Ulla-Britt Söderlund (who won an Academy Award for their creations).

5. The wall of movie posters
This is simple – a wall of framed and artfully arranged posters for Kubrick’s numerous films – but the display has a cumulative effect that’s as appealing to the intellect as to the eye.