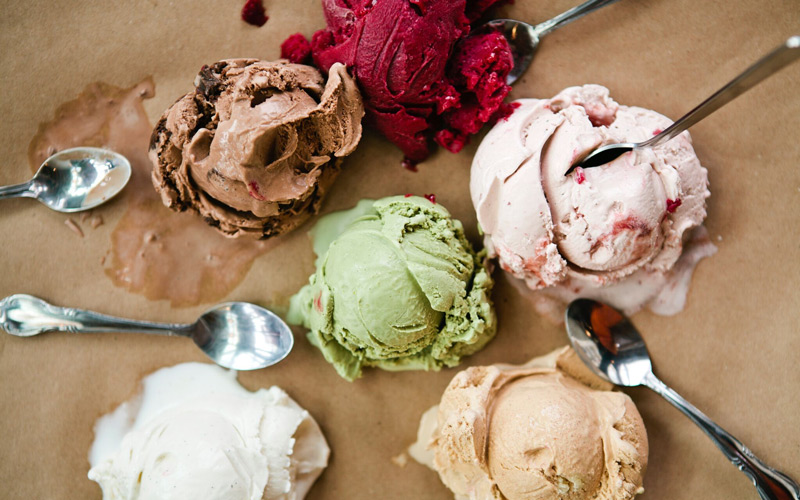 What started in Chicago in 2003 is now the acme of craft fairs. Renegade’s ninth L.A. event unfolds in L.A. State Historic Park (expert tip: the Gold Line’s Chinatown station is less than a block away). Shop goods from more than 250 makers hawking art, ceramics, illustrations, home decor, stationary, and more; stay all day (from 11 a.m. – 6 p.m.) to partake in DIY workshops, indulge in treats from folks like Jeni’s Splendid Ice Cream and Front Porch Pops, and hop into photo booths. The best part? It’s free.

One way to avoid the lines at Salt & Straw is to skip their brick and mortar locations altogether. Instead head to Boxwood on the Roof, the rooftop bar at West Hollywood’s London hotel, for a dairy-fueled happy hour on Friday from 4 p.m. to 8 p.m. Double fist a cocktail and one of four S&S heavy hitters—or four or four, because live your truth: Sea Salt with Caramel Ribbons, Honey Lavender, Silencio Black Tea with Coconut Stracciatella, and Freckled Woodblock Chocolate. Added bonus: drool-worthy ice cream selfies with panoramic views of L.A. as the backdrop.

The actor/comedian/musician/beatboxer takes over the Getty on Saturday as part of the museum’s Off the 405 series. Experience the glory of his weirdness during a fully improvised show performed from 6 p.m. to 9 p.m, complete with songs, jokes, loop pedals, and probably lots of other bonkers things that ensure a one-of-a-kind comedic experience. If that weren’t enough, he’s joined by Claire L. Evans and Jonah Bechtolt of L.A.’s own YACHT, who’ll be taking care of the tunes.

UCLA students started this LGBTQ film festival in 1982, making it L.A.’s longest-running one, period (happy 35th, Outfest!). Catch more than 150 shorts, features, documentaries, and TV episodes in venues like REDCAT and the Orpheum. Panels round out the programming.

RELATED: Here’s a List of the 12 Things You Need to Do in July