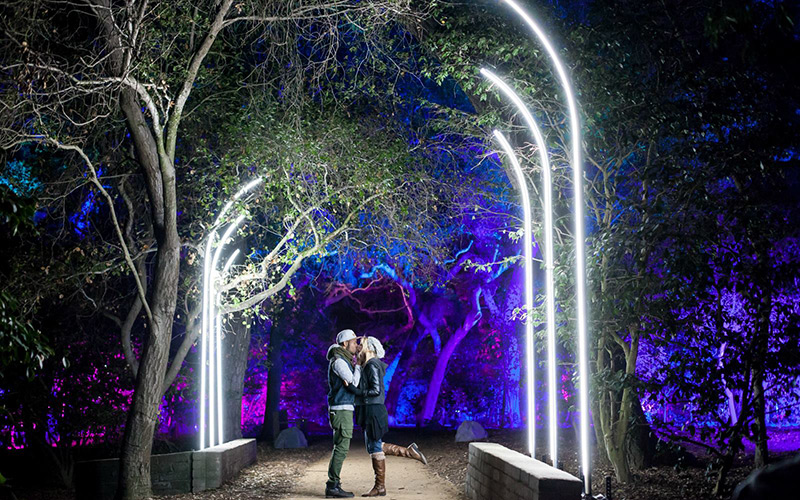 Etsy dreams become a reality at this sprawling artisanal fair held at Old Pasadena’s Central Park. More than 200 vendors selling everything from bowties to candles to papergoods will welcome you with open booths and open arms between 10 a.m. and 4 p.m. It’s free to attend, and yes, bring your pup.

Some say imitation is the highest form of flattery, but in musical theater, parody takes top honors. Gerard Alessandrini is the Weird Al of Broadway, and his answer to Hamilton is Spamilton, a spoof of Lin-Manuel Miranda’s hip-hop juggernaut opening at the Kirk Douglas Theater. You’ll hear riffs on many songs from the OG soundtrack, plus a few jabs at other beloved musicals (watch out, Book of Mormon).

Descanso Gardens’s interactive light fest returns for a second year. A timed-entry ticket (starting at $23 for members, $28 for non-members) grants you access to a one-mile route through ten different interactive light displays that put a twist on classic holiday décor (expect rainbow-colored forests and hands-on art installations). Get your fill of touching the art, then indulge in some crab dip or bread pudding at Descanso’s restaurant, Maple.

If last year was any indication, Disney Hall’s smorgasbord is going to be equal parts interesting and weird and great. The institution hosts 12 hours’ worth of musical wonders, all of which are performed by emerging L.A. ensembles; you can even catch one of two encore performances of War of the Worlds, a new opera from The Industry’s Yuval Sharon. (Pro tip: if you can’t score tickets to the seated event at Disney Hall, hear it projected from one of three WWII-era sirens—for free, no less—around DTLA. Locations here.)

Ice skating in the dead of winter usually requires resilience. (And lots of layers.) In L.A., it’s a paradoxical joy. Skaters of all skill levels can take a few turns around Pershing Square’s temporary ice rink nestled amongst downtown’s skyscrapers. Walk over to Grand Central Market after your hour-long skate sesh and warm up with a coffee from G&B.