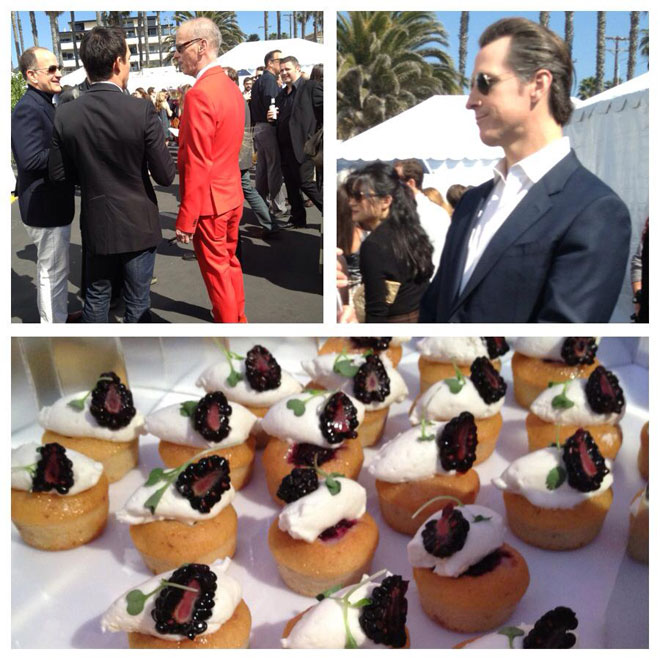 If the Golden Globes are the Oscars’ kooky, drunken aunt, then the Film Indepdent Spirit Awards are their foulmouthed, tipsy cousin. (Note the running theme among the non-Academy Awards shows: the availability of alcohol during the telecast.) Recorded this afternoon in a glamorous tent set up in a not-so-glamorous parking lot along Santa Monica beach, the Spirit Awards are a snappy informal affair with a bottle of Jameson on every table, an orange tote bag under every chair, and plenty of time for actors to mingle before the broadcast begins.

Whether it was a warmup or a consolation prize for tomorrow’s Oscars, Silver Linings Playbook almost swept the awards, winning four of the five categories in which it was nominated and beating Beasts of the Southern Wild in all of the big ones: Best Female Lead, Best Director, and Best Feature. Silver Linings only lost in the Best Male Lead category when John Hawkes of The Sessions beat Bradley Cooper. The acclaimed Beasts won only won one award, Best Cinematography. Why does that matter? It doesn’t. Unless you think the “indie” in “Indie Spirit Awards” should, you know, honor a film that was independently made. Then you have something to gnash your teeth about.

1. Andy Samberg Kills It
We’ve been laughing along to his Lonely Island sketches and SNL videos for years, but today the funnyman proved he could — and should — be hosting more big-time awards shows. In between self-consciously nerdy film jokes, Samberg got in yuks about Oscar Pistorius, Amour, Jack Black, and Sam Rockwell to name just a few.

On the Indie Spirit Awards:
“It’s the only awards show seen by more people sitting in this room than on TV.”

On Wes Anderson:
“Hal Ashby called. He wants his establishing shots back.”

On the IFC:
“The IFC’S slogan is “always on, slightly off,” which coincidentally is also Anne Hathaway’s slogan.”

On Bernie:
“It’s in my top two movies of all time with the word Bernie in the title. I’m no going to say what the other one is.”

2. John Waters Schools Everyone in the Elements of Style
As dapper as he is witty, the Baltimorean filmmaker made the informal affair a red tie event, donning a cherry red suit, red tie, and matching red sneakers. Filth never looked so good.

3. Derek Connolly Gives The Best/Worst Acceptance Speech
The writer of time-travel comedy Safety Not Guaranteed was either stoned or stunned, probably the former. Accepting his award for Best First Screenplay, Connolly rambled on… and on and on and on. Bryan Cranston of Breaking Bad walked onstage and poured him a shot of Jameson’s — that’s the kind of PR you can’t buy — but even that didn’t work. Neither did Daniel Radcliffe urgently signaling for Connolly to stop. Finally, presenter Kerry Washington took Connolly by the shoulders and led him offstage.

4. Quvenzhané Wallis Is Not Amused
After a video spoof of Beasts of the Southern Wild in which Jack Black coerces Samberg and Jack McBrayer of 30 Rock to smash stuff, the camera cuts to Wallis. Her reaction is priceless. Shaking her head the precocious child actress simply mouthed, “What the…?” Even then she seemed more amused than Marina Abramovic who looked like hell had just frozen over when the film about her life, Marina Abramovic: The Artist is Present, lost to The Invisible War for the Best Documentary.

5. Flesh Be Damned
Despite his penchant for cinematic shirtlessness, Matthew McConaughey remained fully clothed when accepting the Best Supporting Male award for his role as a stripping guru in Magic Mike. Helen Hunt also didn’t go full-frontal when accepting her Best Supporting Female award for playing a sex surrogate in The Sessions. The closest we got was John Hawkes threatening to take off his pants during Andy Samberg’s opening monologue, which included a bit about the lack of male frontal nudity.

Rashida Jones and Will McCormack, “Celeste and Jesse Forever”

WINNER: “The Perks of Being a Wallflower”

“Sound of My Voice”

Mynette Louie, “Stones in the Sun”

Someone to Watch Award

“Once Upon a Time in Anatolia”

Brit Marling, “Sound of My Voice”

Ira Sachs, “Keep the Lights On”

“How to Survive a Plague”

“Marina Abramovic: The Artist is Present”

Ira Sachs, “Keep the Lights On”

Thure Lindhardt, “Keep the Lights On”

“Beasts of the Southern Wild”

“Keep the Lights On”

Indie Spirits Bring The Fun, ‘F-ck You,’ And Find ‘Lost’ Maggie Gyllenhaal A Lot of Wins