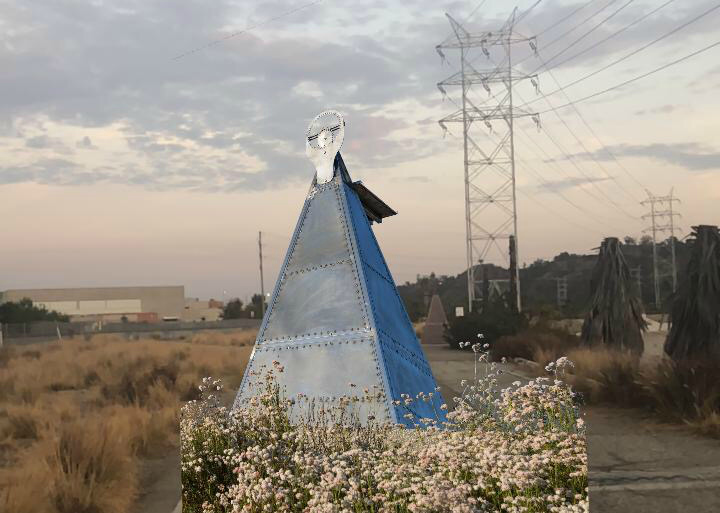 Beatriz Cortez created a mechanical sculpture of a metal pyramid, inspired by ancient Mayan agricultural calendars. Physically, two versions of the piece are located in Los Angeles. A third iteration also exists–standing near the spot along the Rio Grande River where migrant Claudia Gómez González was killed by an American Customs and Border Protection agent–but it can only be viewed using augmented reality technology.

Cortez’s kinetic sculptures can be viewed at the Hammer, as part of Made in L.A., and as a larger, outdoor installation at the Clockshop Bowtie Project arts space along the Los Angeles River. The pristine gallery and the industrial outdoor space are linked via a live image stream, creating a sense that the work is inhabiting two worlds at once. It’s something the artist, an immigrant from El Salvador who feels connected to two countries, wanted to express.

To now link the project to the site of González’s death at the hands of a border agent, she is using an mobile app called 4th Wall, created by another L.A. artist, Nancy Baker Cahill. A new project within the app called Coordinates just launched, and its goal is to use A.R. technology as a tool of political resistance by putting it in the hands of artists like Cortez who create timely, provocative works.

Other pieces included in the launch of the Coordinates project include Impotence Incarnate by Tanya Aguiñiga, which can be viewed along the border wall in Tijuana; Both by Kenturah Davis, which can be seen amongst the Great Pyramids in Giza, Egypt; Eminent Domain by Micol Hebron, which hovers over Dodger Stadium, and The President Wilson, 1928 by Debra Scacco, in the water next to the Statue of Liberty. Baker Cahill herself also has a piece in Coordinates, Hurt Colors, which can be viewed at the site of last year’s mass shooting in Las Vegas.

The artworks can only be seen by users who have the 4th Wall app, creating an intimate, powerful viewing experience. The pieces will be virtually installed in their locations for limited periods of time, and over time new works in new locations will be brought online.

“I’ve always been interested in imagining new models for public art,” Baker Cahill told ARTnews. “My long-term goal is that [4th Wall] will be a large-scale, public A.R. art exhibition that is ever-changing.”

RELATED: The Best Exhibits at Museums and Galleries in L.A. This Month

How an Adorable, Grinning Dumpster Fire Became a Symbol for 2020