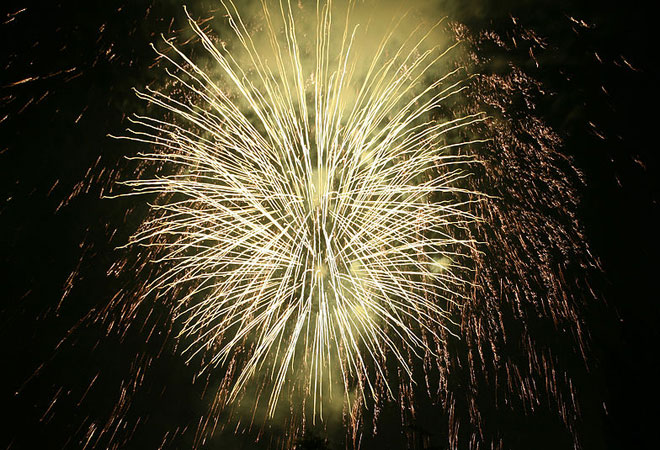 It’s impossible to not be impressed by fireworks. And on the Fourth of July they’re integral, complimenting the festivities spirit while keeping hungry dogs and pesky squirrels away from burgers and hot dogs. This year, we’ve compiled 10 events where you can enjoy pyrotechnics in red, white, blue, and every other color of the rainbow.

Fun in the Sun 2013, 15th Annual Fireworks Festival
Where: CBS Studio Center, 4024 Radford Avenue, Studio City
When: July 4, 4:30-9:30 p.m.
What: A Beach Boys tribute band headlines this event, which includes a BBQ dinner, wine and beer tasting, a kid’s fun zone with a classic car show, a Black Sheep Squadron exhibition where kids can build model airplanes, and a rooftop fireworks show. Tickets cost between $10 and $100.

AmericaFest
Where: The Rose Bowl, 1001 Rose Bowl Drive, Pasadena
When: July 4, 2 p.m. Fireworks start at 9:00 p.m.
What: Boasting “the biggest firework show in Southern California” this celebration includes headliners Mariachi Divas and Kenny G as well as some TNT motorcycle stunts. Tickets are $13 but free for active military and children under 7.

Palisades Americanism Parade
Where: Pacific Palisades
When: July 4, 2 p.m.
What: The 65th annual parade—one of the top parades in the nation—has Chris Shiflett from the Foo Fighters headlining the post-parade concert, and locals can participate in a patriotic home contest.

Disney’s Celebrate America! A 4th of July Concert in the Sky
Where: Disneyland, 1313 S. Harbor Boulevard, Anaheim
When: July 1-7, 9:30 p.m.
What: The magical fireworks show returns to Disneyland to ring in Independence Day with a colorful array of red, white, and blue.

Salute to America
Where: Starlight Bowl, 1249 Lockheed View Drive, Burbank
When: July 4, 6:30 p.m.
What: Starlight Bowl’s 2013 summer concert series kicks off with the United States Marines and musical entertainment by the High Street Band. Fireworks at 9 p.m.  Tickets cost between $8 and $22.

Hollywood Bowl Fireworks Spectacular
Where: The Hollywood Bowl, 2301 N. Highland Avenue, Hollywood
When: July 2-4, 7:30 p.m.
What: Let the spirit move you as the operatic singer Josh Groban takes the stage of the Bowl this Independence Day week. Plus, there’s a fireworks spectacular after each performance. Tickets range from $12 to $240.

4th of July Celebration at Castaic Lake
Where: Castaic Lake
When: July 4, 5 p.m.
What: Offering family activities like fishing, swimming, and picnicking, the park welcomes families for a relaxing holiday at Castaic Lake. Musical entertainment begins at 5 p.m. with a fireworks show at 9 p.m.

KABOOM!
Where: Pomona Fairplex, 1101 W. McKinley, Pomona
When: July 4, 5 p.m.
What: The 27th annual celebration that claims to put “the boom in KABOOM!” features fireworks, motorcycle riders, monster truck drivers, and a buffet. Tickets start at $15.

Starboard and Stripes
Where: The Queen Mary, 1126 Queens Hwy., Long Beach
When: July 4, noon-11 p.m.
What: Celebrate Independence Day aboard the Queen Mary with themed festivities from the 1940s to the present. Families can enjoy photo booths, barbershop quartets, carnival activities, live DJs, a movie screening, and more. Tickets range from $10 to $60.

Marina del Rey 4th of July Fireworks
Where: Burton Chace Park, 13650 Mindanao Way, Marina del Rey
When: July 4, 9:00 p.m.
What: Fireworks over the harbor are fascinating, and nobody does it like Marina del Rey. Shot from a barge in the main channel, these free fireworks are spectacular.