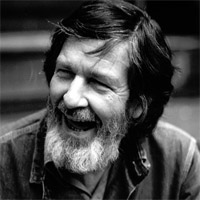 Happy birthday, John Cage. Today, the genre-bending experimental composer (and avid mycologist) who died in 1992 would have turned 100. Probably best known outside the music world for sitting silently at a piano and doing nothing for 4 minutes and 33 seconds, Cage launched his career in Santa Monica. Starting tomorrow, Jacaranda celebrates his centennial with the CAGE 100 Festival, a four-day musical fete that includes a 24-hour piano marathon, a performance of Eric Satie’s “Vexations” by 32 pianists, and a program of Cage’s early percussion works. We got the lowdown on the weekend’s festivities from Jacaranda artistic director and Cage aficionado Patrick Scott, who has attended Cage’s lectures and taken a dance master class with Merce Cunningham, Cage’s long-time artistic and life partner.

What kind of composer was Cage?
Cage has been able to escape the classical music box. He was looked at as a philosopher of sorts, and the radical boundary-breaking strength of his ideas just resonate with people. They have nothing to do with Beethoven, Brahms, or Bach.

What’s the deal with 4’33”?
Just choosing to listen to the experience you’re having is music. It’s a difficult concept, but that’s the essence of 4’33” and why it’s so powerful.

What was Cage’s connection to the L.A. area?
Cage premiered his first music at the Santa Monica Bay Woman’s Club in 1932, so giving a world premiere [of The Ten Thousand Things] in 2012 is kind of amazing. It has a lot that’s going on in it, and I’m sure he used chance operations.

Where did his fascination with chance operations come from?
The most obvious answer, and the one that people will recognize, is the I Ching—you know, the Book of Changes.

What about other influences?
Cage was also inspired by Marcel Duchamp, the social visual artist—with the famous Fountain in 1917, um, the urinal. So there’s a lot that you can extrapolate from the Fountain to 4’33”. It’s basically the artist designating the art, and the act of designating the art is essentially more important than the artwork itself.

What do you want Angelenos to take away from the festival?
I want them to embrace Cage as a Los Angeles composer and to embrace Los Angeles as a place where musical ideas come from. His life leads you to all different aspects and strands of history that we’ve sometimes overlooked.

Why four days of celebration?
There’s so much going on in the world to celebrate this birthday, and we just knew that we couldn’t not celebrate it. The four-day festival seems like the least we could do.