Home Art 3 Questions for Camille Paglia: Why DO We Need Art? 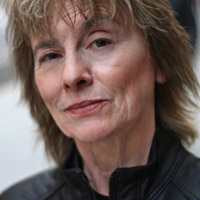 Cultural theorist, art buff, and all-purpose provocateur Camille Paglia has a mission. Her new book, Glittering Images: A Journey Through Art from Egypt to Star Wars, looks at seminal works of art by Monet, Warhol, and George Lucas. Yes, that George Lucas. After repeated viewings of Revenge of the Sith, Paglia dubbed the Star Wars filmmaker “the world’s greatest living artist.”

Irked by what she sees as a vast chasm between art and the public sector, Paglia presides over Zocalo’s cheekily titled panel discussion,“Why Do We Need High Art?”Paglia will make the case for art as a fundamental component of civilization at the Skirball Cultural Center tomorrow night (Thursday, October 25) at 8 p.m.

In the introduction you explain how the open animosity toward art on AM radio and in the United States in general is the reason you set out to write this book. How would you characterize this animosity and how does your book aim to counteract that?
I love AM radio and listen to it constantly. It descends from the wild, abrasive deejays of the 1950s and thus has a brash populist vitality that is quite different from the mellow tones of high-quality FM broadcasting, typified by NPR. It’s a great grief to me that liberal hosts have so rarely succeeded on AM radio. Thus I’ve listened to a lot of conservative radio, with its fascinating spectrum of everyday callers. Over the past 20 years, I’ve become very concerned about the low opinion of art and artists on talk radio, which was reacting to the bitter controversies over sacrilegious art (like Andres Serrano’s “Piss Christ”) from the late 1980s on. Contemporary artists, and in particular abstract artists, are regarded by huge numbers of mainstream citizens as hoaxers and scammers. As a career teacher in art schools, I realized that there was a serious need for outreach to that population. So I decided to write a concise book about the history of Western art that I hope will reach that audience. One of my primary targets, for example, is home-schooling moms, who don’t normally include art history in their curriculum.

What was the selection process like for the various artworks? How did you come up with using Catholic Mass cards as inspiration for the format of the book?
One of the main arguments of my new book is that the current art world, including theory-ridden campus art history departments, has ignored and neglected the spiritual themes of art, including the spirituality of the artistic mission. Although I’m an atheist, I strongly believe in that spiritual vision. It’s part of my heritage from the 1960s, when the spiritual seekers of my generation were exploring Zen Buddhism and Hinduism. Unfortunately, many of them lost their way through overuse of psychedelics, which I warily avoided. I want readers to gaze at my chosen art works exactly as believers contemplate a sacred image. They will be amazed at the sense of peace and serenity that comes from self-subordination to an art work.

You write that George Lucas is the greatest artist of our time, focusing on the marriage of art and technology in his work. Why did you decide to use Revenge of the Sith as the singular work to highlight in the book?
Lucas was not part of my original plan for the book. But as I was searching for strong works of contemporary art with which to end the book, I couldn’t find them. It was very discouraging. Everything seemed to be derivative of something else. No one was making bold statements except in the field of architecture. As I was writing the book—which took five years—I would channel surf for relaxation and repeatedly encounter the Star Wars films being broadcast by Spike TV. Slowly, the enormous power of the volcano-planet finale of Revenge of the Sith worked its magic on me. I became obsessed with it. It seemed like epic poetry, nature painting, and grand opera all rolled into one. After studying it deeply, I think that the long, complex finale of Sith is the most important work of art produced anywhere in the world in the last 30 years.