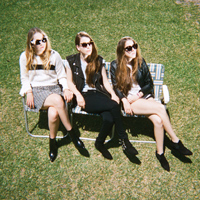 Coachella presents music lovers with a major dilemma: so many great bands, so little time. Allow us to help make your festival planning decisions a little easier.

Over the past couple of years we have caught up with Haim, Grouplove, and AFI, all of which will be playing sets this Friday at the festival. Here’s a chance to brush up on your knowledge of these three acts as you pack your sunscreen and prepare to make the trek into the California desert.

Haim – “Valley Girls: Haim Returns to L.A. & Keeps on Rocking”
Inspired to take up music after playing in the family band (Rockinhaim) sisters Este, Alana, and Danielle Haim, along with drummer Dash Hutton, landed a “kick in the ass” gig opening for the Casablancas. The sisters grew up listening to classic rock acts like The Eagles, Billy Joel, Van Morrison, Santana, the Beatles, and the Rolling Stones, which helps explain why their sound is often compared to that of Fleetwood Mac.

About two years ago Alana, the youngest of the trio, predicted to us that, “this [is] something we could do together for a long, long time.” Since then the band has released a handful of singles and their first full-length album, Days Are Gone. Their first single, “Forever,” was featured in a Target commercial.

Catch the family-affair-turned-global-phenomenon on Friday of both weekends at the Coachella Outdoor Theatre.

Their success as a band has relied on their mutual respect for music and each other. “We understand that when we all agree and are honest, there’s something magical that happens here,” says Gadd. After hopping aboard big name tours over the years with the likes of Florence + the Machine and Foster the People, Grouplove tore into the rock scene, leaving an impressive string of festival performances and talk show appearances in their wake.

Sporting their matching band tattoos the group will take on the main stage Friday of both weekends.

AFI – “After 20 Years and 9 Albums, Punk Band AFI Continues to Evolve—But Not Without a Little Darkness”
With more than 20 years of performing in the thrash music scene, AFI (it stands for “a fire inside”) are the most seasoned of the three groups and probably have the most loyal fan base. Although hailing from Northern California, front man Davey Havok claims they “immediately had a great reaction” from fans new and old when playing in Los Angeles.

On the wake of the release of their ninth album Burials six months ago, the group faces the challenge of staying current. Hovok explains: “The evolution of our sound is something we need in order to stay interested in what we’re doing. As we’re writing, the songs that feel best to us and satisfying what we need from a creative perspective inform what is to come thereafter.”

Living by the musical mantra of “We never know what we’re going to do until we sit down and do it,” this group will perform both Fridays on the main stage.