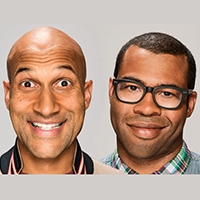 Keegan-Michael Key and Jordan Peele, the duo behind the sketch show Key & Peele, might be the greatest comedic duo today. Their skits address race, social mores, and film and television cliches in ways that have make it clear they’re sharp social satirists–but they throw in plenty of absurdity. At the Los Angeles Film Festival, Elvis Mitchell sat down with the pair to discuss their show, their writing style, and their influences.

As part of the chat, the duo presented three sketches that influenced them.

“Audition” – Mr. Show
Peele spoke of how sketch, drama, or any kind of writing often utilizes conflict, but in real life people go out of their way to avoid conflict. This sketch maximizes that tendency for its humorous effect. The same thing can be seen in “Phone Call,” the first Key & Peele sketch, which they call the thesis statement for the series.

“Louie” – The State
This sketch was designed by The State as a middle finger to the executives who requested that the troupe add a recurring character with a catchphrase to its roster. One of Key and Peele’s many goals was to avoid using catchphrases (or recurring characters, though they have sparingly incorporated them as the show has gone on).

“The Slave” – In Living Color
Key and Peele both saw this sketch when they were young and agreed that it blew their minds. The brazen focus on a loaded issue was an inspiration to the duo, who drew a direct line between this sketch and their own “Auction Block.”

In their show, Key and Peele have a knack for taking something familiar and twisting it into something new. It’s a strategy that continues to serve them well as they go into their fourth season, which will begin airing sometime in the fall on Comedy Central. Until then, here are their thoughts on the finer points of making people laugh.

Reaching the Masses
Peele: “One of the things we want our show to do is to reach everybody, if possible. I think there’s a lot of artists in comedy who are awesome, but have this perspective that, ‘This is my style, if you don’t get it, it’s not for you. Fuck you.’ But for us, the equation has to include: ‘Did you get everybody to laugh?’ That’s funnier than if you get one person to laugh, I don’t care how you look at it.”

Surprise Endings
Key: “We’re no-ending phobic. On MadTV, there were lots of scenes where you’d see at the end of the script there’d be mayhem taking place on stage, and it’d say “rave out,” and that just means that everybody’s going crazy and camera pans out and fades to black. With our show, one thing we wanted to do was give our best effort to always put a button on the scene. Even when the only way you can do that is by blowing people up.”

Peele: “It’s a very hard thing to end a sketch… We have this thing on stage called a blow, at the end of a scene, when they pull the lights. So that moment, the last image or last sentence uttered, resonates with the audience. And you can get a laugh from something that wouldn’t have been funny if you hadn’t pulled out then and there. It’s like an exclamation point.”

Shock and Awe
Peele: “Any time you can anticipate what an audience is going to presume about a sketch, you have them in the palm of your hand. And that’s the time to give them something other than what they expect. We call it comedic judo. It’s about using the audience’s momentum against them.”