Home Art Take an Inside Look at 29Rooms, the Hottest New Art Pop-Up in... 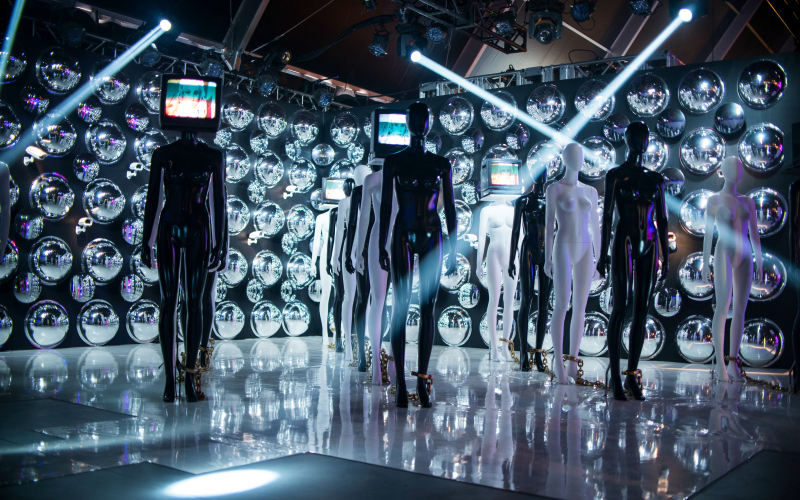 “Turn it into art.” That’s the theme of 29Rooms, a pop-up curated by fashion and lifestyle website Refinery29 that makes its L.A. debut today, following a massively popular New York City run. Each of the 29 rooms and spaces inside the massive circus tent erected in an Arts District parking lot investigates that theme in a fun, engaging way.

Several of the rooms were designed by noted contemporary artists, others by pop-culture celebrities, and a few in collaboration with sponsor brands. All are available for attendees to explore, touch, play with, and take photos amid, with the stated hope that, after viewing the exhibit, one leaves with a greater feeling of creative inspiration.

While you’ll certainly want to take your time with each of the spaces, it’s a lot to take in. To help you avoid sensory overload, here are some of our favorite rooms in the show.

“Erotica in Bloom” by Maisie Cousins

Installation and video artist Maisie Cousins designed this hanging garden that invites viewers to engage with ideas of nature and sensuality, and the tension between the wilds of nature and the organization of society. The largest blossom sculptures allow visitors to step inside, where abstract video art pieces exploring the themes play in the private viewing space.

“Just Be” by Ashlee Haze, Jonathan Rosen, and Wallplay

Ashlee Haze, an inspiring Atlanta-based spoken word artist and poet, is the powerful voice you’ve heard reciting her ode to Missy Elliott at the opening of Blood Orange’s “By Ourselves.” She returns to themes of empowerment and self-acceptance in this interactive space, created with conceptual artist Jonathan Rosen and art-tech company Wallplay. Instead of fighting the fact that viewers love to photograph themselves in art installations, the piece actually demands it, with words on a mirrored video wall moving faster than the human eye, that creates a private affirmation for the viewer that appears only when photographed.

“Become the Masterpiece” by Alexa Meade

Arguably the most eye-catching of the installations in the entire space (though there’s some competition for that title) Alexa Meade’s “Become the Masterpiece” invites participants to shed self-consciousness, dress up with capes, coats, and props—all hand-painted by Meade—and present themselves on a psychedelic stage. One side is a riot of bright colors, the other is monochromatic black and white, but both feature swirling, kaleidoscopic designs that naturally encourage performance and play.

“What’s Your Frequency?” by Janelle Monáe

The intersection of art and technology is a theme that several of the 29Rooms installations touch upon, but the piece by musician, actress, and artist Janelle Monáe tackles the issue head-on. The piece engages with ideas of the surveillance state (screens placed on the heads of mannequins play surreptitious video of viewers themselves mixed in with found footage) and the conformity of aesthetic that pervasive documentation via technology often seems to perpetuate.

Billed as a “surreal speakeasy,”  the dim room that viewers step into has been set up by British artist Juno Calypso like a plush old-school jazz club, with chanteuse Darby Walker on the intimate stage. The viewer is asked to submit the outline of a dream they’ve had and, along with her live accompanist, Walker improvises a song on the spot, just for the participant. Depending on the dream offered, the songs can be light and fun, or poignant and powerful.

RELATED: An Open Letter to the City of Los Angeles at Christmas