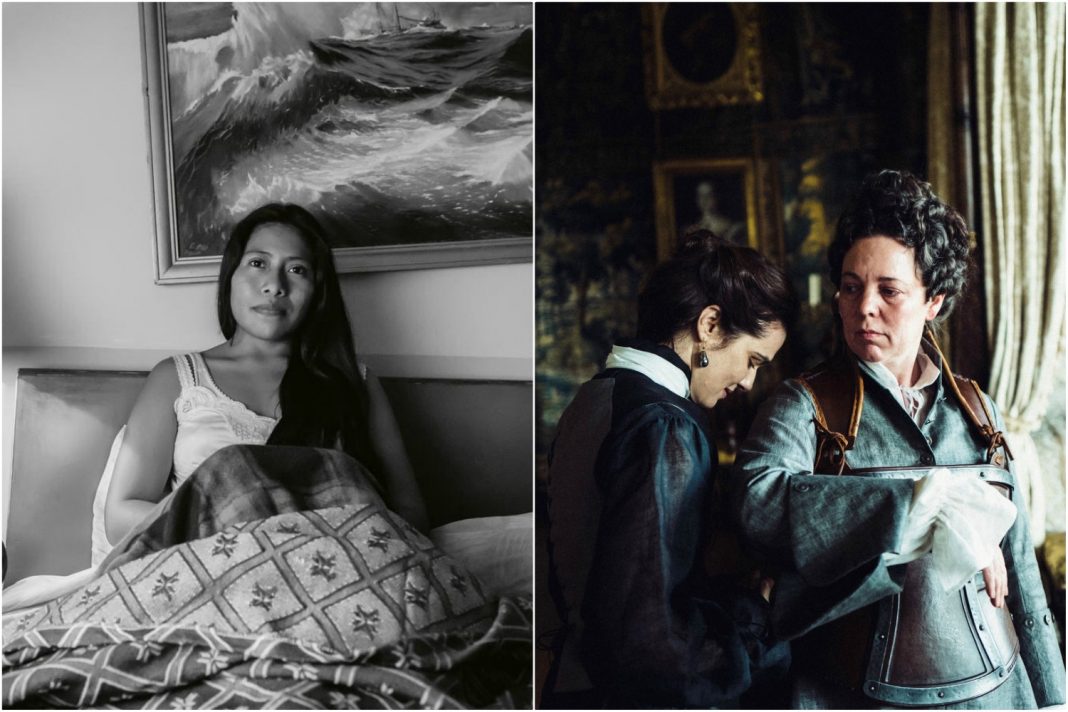 Nominations for the 91st Academy Awards are out, and the most-nominated films of the year are Roma and The Favourite. Each film picked up 10 nods, including a spot among the eight selections for Best Picture. And while both films were directed by men, each movie centers on women, making them a departure from awards fare of many previous years.

Roma is filmmaker Alfonso Cuarón’s semi-autobiographical look at the lives of women, particularly domestic workers, in 1970s Mexico. The film, which is in Spanish and was made on location in Mexico, is also nominated for Best Foreign Language Film. Its star, Yalitza Aparicio, who plays a maid named Cleo, is only the fourth Latina to ever be nominated for Best Actress in a Leading Role, and the first in 14 years. Marina de Tavira, who plays Cleo’s employer, Sophia, is also nominated for Best Supporting Actress. The film was distributed by Netflix, marking the first time that the streaming service has had an original film vying for the top spot at the Oscars.

On the surface, The Favourite is more similar to the kinds of monarchy-fixated historical costume epics that are typically associated with big awards–but the similarity is superficial. For one, it’s a comedy–a category that rarely fares well in the Best Picture category. But perhaps more distinctive about the story of two cousins competing for the favor of Queen Anne is that male characters in the film are generally beside the point and largely made to look bafoonish. Emma Stone and Rachel Weisz snagged noms for Best Supporting Actress, and Olivia Colman is a favorite (OK, favourite) to win Best Actress.

While the awards seem to be celebrating depictions of femalecentric stories on screen, there was no big movement for celebrating female makers of those films. Zero female directors were nominated this year (again), and only two female writers appear in the screenplay awards, both of them co-nominated with male collaborators. Can You Ever Forgive Me? picked up nominations in multiple categories, but nothing for director Marielle Heller. One of the Best Documentary Film nominees, Free Solo, was co-directed by Elizabeth Chai.

Despite years of insistence by the Academy of Motion Picture Arts and Sciences that it is focused on promoting diversity in its ranks, there is still a lot of work to do. According to Vox, even after two years of inviting unprecedented numbers of women and people of color to join the organization, the current membership stands at just 31 percent female and 16 percent nonwhite.

Other 2019 Oscar contenders include A Star Is Born, Bradley Cooper’s rockist remake of a remake of a remake (and that’s if you don’t consider the 1937 version a remake of 1932’s What Price Hollywood?) featuring Lady Gaga, which had basked in the glow of early awards buzz, but only came in with eight, the same number as Dick Cheney biopic Vice. Black Panther scooped seven and BlacKkKlansman six.

Among Black Panther’s nominees is Kendrick Lamar, with a Best Original Song nomination for “All the Stars.” Should he win, he’ll be in an extremely exclusive club of people who have won a Pulitzer, Oscar, and Grammy (the coveted “POG” rather than “EGOT”). His only living peer on that front: Stephen Sondheim.

The 2019 Oscars will take place at the Dolby Theater in Hollywood on February 24, with a telecast on ABC. As of now, there has been no announcement of a formal host for the evening; instead this year’s ceremony is expected to rely more on skits, musical numbers, and short appearances by a variety of stars.

Best motion picture of the year

Performance by an actor in a leading role

Performance by an actor in a supporting role

Mahershala Ali in Green Book
Adam Driver in BlacKkKlansman
Sam Elliott in A Star Is Born
Richard E. Grant in Can You Ever Forgive Me?
Sam Rockwell in Vice

Performance by an actress in a leading role

Yalitza Aparicio in Roma
Glenn Close in The Wife
Olivia Colman in The Favourite
Lady Gaga in A Star Is Born
Melissa McCarthy in Can You Ever Forgive Me?

Performance by an actress in a supporting role

Achievement in makeup and hairstyling

“All The Stars” from Black Panther
Music by Mark Spears, Kendrick Lamar Duckworth and Anthony Tiffith; Lyric by Kendrick Lamar Duckworth, Anthony Tiffith and Solana Rowe
“I’ll Fight” from RBG
Music and Lyric by Diane Warren
“The Place Where Lost Things Go” from Mary Poppins Returns
Music by Marc Shaiman; Lyric by Scott Wittman and Marc Shaiman
“Shallow” from A Star Is Born
Music and Lyric by Lady Gaga, Mark Ronson, Anthony Rossomando and Andrew Wyatt
“When A Cowboy Trades His Spurs For Wings” from The Ballad of Buster Scruggs
Music and Lyric by David Rawlings and Gillian Welch

The Ballad of Buster Scruggs, Written by Joel Coen & Ethan Coen
BlacKkKlansman, Written by Charlie Wachtel & David Rabinowitz and Kevin Willmott & Spike Lee
Can You Ever Forgive Me? Screenplay by Nicole Holofcener and Jeff Whitty
If Beale Street Could Talk Written for the screen by Barry Jenkins
A Star Is Born, Screenplay by Eric Roth and Bradley Cooper & Will Fetters