Home Awards Watch 2014 Grammys: Who Should Win; Who Will Win 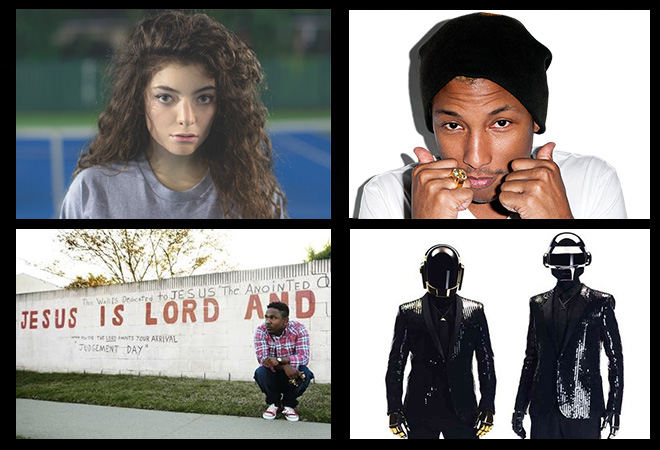 Unfortunately for the 2014 Grammys, we’ve seen the garish twerk-a-thon that was the 2013 VMAs. After the pearl-clutching cultural critique that Miley Cyrus’s performance inspired, we’re left with one undeniable fact: In a single performance, the landscape of the music awards show has been fundamentally altered. Audiences will never again be content with an occasional wardrobe malfunction or Kanye bumrushing the stage to interrupt a speech. Now, we expect every awards show to be a glow-in-the-dark burlesques of menacing teddy bears and defiled foam fingers. Oh, to be a music fan in 2014. The Grammys continue to baffle us, but that’s not going to stop us from predicting who will win big and who will be shut out.

SONG OF THE YEAR
Who Should Win: Lorde, “Royals”
Who Will Win: Katy Perry, “Roar”
If you had told us in 2013 that Katy Perry would write a song referencing the pump-up track from Rocky III (read: everyone’s least favorite karaoke selection), we would have laughed. If you had told us her anthem of empowerment would be played anywhere but spin classes and AmericanIdol auditions, we would have wept. Sometimes pop music is cruel and inscrutable, like Mr. T in Rocky III, but if we’ve learned anything from Sylvester Stallone’s cinematic pinnacle, never discount the underdog. Lorde, the 17-year-old phenom from New Zealand, may just win this category for her catchy critique of pop culture.

ALBUM OF THE YEAR
Who Should Win: Kendrick Lamar, good kid m.A.A.d City
Who Will Win: Macklemore & Ryan Lewis, The Heist
If you’ve actually got twenty dollars in your pocket, stop popping tags and go buy Kendrick Lamar’s album instead. Even Macklemore himself has publicly stated he thinks Lamar’s album should win this category. We commend Macklemore for his humility and the positivity he’s injecting into the pop charts (listen to “Same Love” for a dose of stomach butterflies), but Kendrick’s debut effort clearly outshines his.

BEST NEW ARTIST
Who Should Win: James Blake
Who Will Win: Macklemore & Ryan Lewis
This is the category where scenesters argue with old white dudes about the definition of “new.” Also, the definition of “music.” Instead of selecting James Blake, the English songwriter whose brand of electronically infused R&B is one the most captivating sounds in the current music landscape, the voting committee will likely honor the rapper from Seattle for his middle school-friendly hits.

BEST POP DUO/GROUP PERFORMANCE
Who Should Win: Daft Punk, “Get Lucky”
Who Will Win: Robin Thicke, Featuring T.I. & Pharrell “Blurred Lines”
There can be only one—one summer anthem that everyone initially loves then gets so sick of that by the time September rolls around the only luck they’re hoping to get is never hearing the song again. In that regard, “Blurred Lines,” the smutty, wildly overplayed, Marvin Gaye-cribbing soul song by Robin Thicke was this year’s champ. It was the soundtrack to our best nights and our worst nights because it was soundtrack to every night—whether or not we wanted it to be.

BEST DANCE/ELECTRONICA ALBUM
Who Should Win: Disclosure, Settle
Who Will Win: Daft Punk, Random Access Memories
Both of these albums are innovative in their own way. Daft Punk crafted futuristic wedding reception jams that incorporated surprising disco rhythms, while Disclosure deftly steered House music closer to the mainstream by incorporating silky R&B guest vocalists. Both groups have grounds for to nab this award but what’s most important is that there’s no chance for Skrillex to win.

BEST ROCK ALBUM
Who Should Win: Queens of the Stone Age, …Like Clockwork
Who Will Win: Kings Of Leon, Mechanical Bull
In the year 2014, the other nominees in this category are Black Sabbath, David Bowie, and Led Zeppelin. Good thing Grammy voters are looking to the future. At least the award will probably go to an act that hit its creative peak five years ago instead of four decades ago. That’s progress, right?

BEST ALTERNATIVE MUSIC ALBUM
Who Should Win: The National, Trouble Will Find Me
Who Will Win: Nine Inch Nails, Hesitation Marks
If Trent Reznor wins, it’ll be because he’s talented—but also because Beats By Dre thought it would be good marketing synergy for the rap impresario’s new mind control app (read: music streaming service that’s waaaay different from all the other music streaming services). The National’s dreary songs about languishing love and flirting with depression are better than ever on their on their latest album but they’re probably too much of a bummer for the voting committee to wholeheartedly support.

PRODUCER OF THE YEAR NON-CLASSICAL
Who Should Win: Pharrell
Who Will Win: Pharrell
Either the perpetually happy and youthful 40-year-old Pharrell has discovered a secret fountain of youth in the recesses of downtown L.A. or the uber-producer has Benjamin Button disease—which means that next year we’ll watch as the golden gramophone goes to a sharply dressed baby.

Grammys Review: Show Had Its Moments But Was Also A Harsh Reminder Of Just How Short Life Is