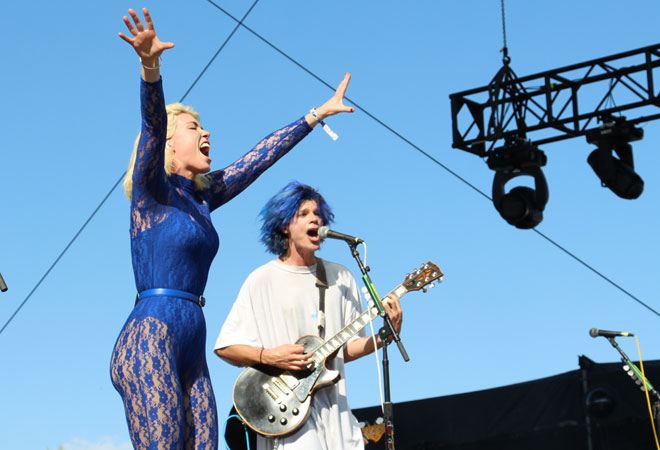 Weekend One of Coachella 2014 is officially over leaving partial memories, wilted flower crowns, and gnarly sunburns in its wake. Friday brought soaring temperatures and Saturday night’s small sandstorm threw a wrench in the weekend festivities. But no weather woes could put the brakes on a weird and wonderful weekend of music that featured a reunited OutKast’s first U.S. show in 12 years and a string of star-studded collaborations.

OutKast drew a massive crowd on the first night, but the low production value of their set left fans divided. Performing partly behind a triangular mesh screen with what appeared to be a kitchen table in it, Andre 3000 and Big Boi barely interacted with each another. We won’t even discuss the taxidermy polar bear they brought out. They did, however, play every OutKast hit the crowd was hoping for, opening with “B.O.B. (Bombs Over Baghdad)” and ending with “Hey Ya.” Rapper Future joined them, as did Janelle Monae to perform her song “Tightrope.” Andre 3000 confirmed that Prince, “one of my idols,” was backstage, but the Purple One didn’t join them on stage. Ellie Goulding, Haim, Grouplove, AFI, and Bastille also drew passionate Friday crowds.

Despite the sandy winds—Queens of the Stone Age frontman Josh Homme said, “It’s about the time we ‘Go With The Flow.’ It’s too dusty and f—d up to do anything else.”—Saturday was the pinnacle of the weekend. It featured surprise appearances by Gwen Stefani, P. Diddy, Nelly, Snoop Dog, Busta Rhymes, and Tyler, The Creator during Pharrell’s set, Jay-Z and P. Diddy during Nas’s set, and Beyoncé during her sister Solange’s set.

Scottish electro-pop band Chvrches and New Zealand pop prodigy Lorde also drew sizable crowds who heard tracks from their wildly successful debut albums. Wearing all white instead of her usual basic black, Lorde said from stage that this was a thrill for her because Coachella booked her last May and, at the time, that was her first major booking.

Strokes frontman Julian Casablancas played to a packed Mojave Tent, but the numbers dwindled some during his performance, possibly because he favored new material over tracks from his solo album or Strokes hits. Casablancas didn’t let it bother him.

“Thank you for choosing us in this musical buffet,” he said. “To the people leaving, this music is meant to alienate all the right people, so go do your thing.” After Casablancas, L.A.’s Warpaint took the stage, and Queens of the Stone Age frontman Josh Homme was spotted enjoying their psychedelic rock from sidestage. Mojave’s stellar run continued with a Pixies’ set, now with Paz Lenchantan on bass, later that evening.

While Pharrell continued his parade of special guests at the Outdoor Theater, the sparse crowd gathering at the main stage before Muse’s set made it look like they’d suffer the same fate as last year’s English headliner, the Stone Roses. An iconic band in Britain, the Roses played to what felt like a handful of fans in the desert last year. Once Pharrell’s set ended, though, the masses descended on the main stage for Matt Bellamy and co.’s typically grandiose performance, which included actors showering the crowd with fake money with the band’s name on it and a cover of Nirvana’s “Lithium” to commemorate the 20th anniversary of Kurt Cobain’s death.

After a day like that, Sunday had large shoes to fill. It got off to a slow start, but the Naked & Famous reanimated the crowd with danceable hits “Punching in a Dream” and “Young Blood.” Then, Neutral Milk Hotel urged the crowd to put down their smartphones and “just be together.” The indie band, which is on tour after a long hiatus, played tracks from its seminal album, In An Aeroplane Over The Sea, but requested that there be no live feed on the festival screens or professional photography.

Lana Del Rey drew an unusually large crowd—or a justifiably large one; the polarized opinions of her continue to mystify—and played hits like “Video Games” along with her new track “West Coast.”

For anyone who was gambling on where to find the best special guests, Calvin Harris’s set was the smart bet. As the sun set, he drew an enormous crowd anxious to dance the dust out of their pores—few DJs get main stage real estate—but there was no Rihanna, no Ellie Goulding (we know you were there, Ellie), and no Florence Welch, though we quite literally bumped into her as she rushed through the crowd.

There were some high-profile guests to speak of: Drake joined Jhene Aiko’s set, Slash joined Motörhead for “Ace of Spades,” and, oddly enough, Justin Bieber joined Chance the Rapper on the main stage (when did they let him leave Canada?). As the night drew to a close Blondie’s Debbie Harry joined Arcade Fire for their cover of “Heart of Glass.”

After Beck’s set, a figure wearing shattered mirrors on a platform in the middle of the crowd drew attention away from the stage while Arcade Fire walked out and launched into “Reflektor.” Later, frontwoman Régine Chassagne strapped mirrors to her hands while her collaborator (and hubby), frontman Win Butler, took the camera out of a photographer’s hand to snap photos from the stage. The whole thing was a play on the themes of self-reflection in the band’s lyrics.

Butler took a jab at the increasingly highbrow Coachella culture during their set, saying, “There’s a lot of fake VIP room bullshit happening at this festival, and sometimes people dream of being in there, but you get back there and it super sucks, so don’t worry about it.” He took a subtler dig at EDM and programmed music at the festival by giving “a shout out to all the bands playing instruments this weekend” before thanking Coachella for having them back. Headlined by Arcade Fire, Sunday night ended on a high note—and much less sandy one.

Coachella Weekend Two begins Friday, April 18. Check out what bands are playing “Localchella” shows in and around Los Angeles this week.