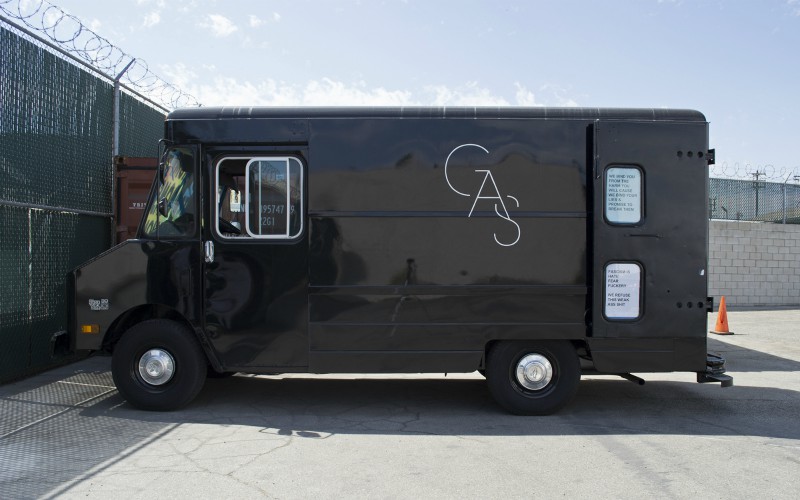 It may not have the cachet of a storefront in Culver City or Silver Lake, but owning an art gallery in a truck has its perks: you don’t have to pay rent, you can go anywhere in the city you please, and you can use as many expletives as you want in your exhibition titles.

That’s what Ceci Moss discovered after opening Gas Gallery, a mobile art space that exists both IRL and online. Last May, Moss found a 1993 Chevrolet P30 step van on Craigslist, listed by someone in Austin who originally used it as a roaming gallery, too. Afraid it wouldn’t quite survive the drive, Moss shipped it to L.A. where she repainted the walls, installed new lights, and then opened its rear double doors to L.A. art lovers in September.

“I was really lucky,” Moss says of finding the truck. “And [the previous owner] was thrilled that someone wanted to do something that was still art related.”

The truck only has around 60,000 miles on it and was kept in good condition. On LinkedIn, Moss describes herself as the director/truck driver of Gas; she jokingly calls her dog, Rosie, director of human resources.

Currently on view inside Gas, the exhibit Liquid Love features nine artists who are also poets, writers, curators, and researchers. While the exhibition title might sound like your average late-winter, love-focused exhibition, it actually takes its name from sociologist Zygmunt Bauman’s book Liquid Love: On the Frailty of Human Bonds. The artists channel all the messy parts of human relationships and combine them with critiques of our collective obsession with capitalism and sexualized images. Kathy Cho’s “Yuna (미리야!)” shows selections from her Twitter feed displayed on a screen as a rapid-fire reflection on bad dates, identity, and failed relationships. Siri then reads off each tweet in Korean-accented English.

Moss keeps a running list of her dream shows and with two decades of art experience under her belt, finding artists happens pretty naturally. Her experience includes positions as assistant curator of visual arts at the Yerba Buena Center for the Arts in San Francisco and special projects coordinator at the New Museum in New York. She also worked as senior editor for the digital art incubator Rhizome and an adjunct instructor and professor at schools including NYU and SFAI.

“You might do a studio visit with an artist like eight years ago and then you’re like, ‘Oh my god, this actually would be the best opportunity for them,’ so these things kind of come around as well,” says Moss.

The only missing piece: figuring out how their work fits into the space, not only thematically but literally. Moss excels at finding creative solutions for the limited space. As part of Liquid Love, a gallery attendant will always be wearing a single, handmade earring created by jewelry line Small Things. The piece is newly commissioned and one-of-a-kind; the attendant becomes part of the exhibit. For the gallery’s previous exhibit, Fuck the Patriarchy, Moss wore a gender-neutral outfit designed by the collective Gallery Y2K.

Moss is always thinking about the nature of her space and its purpose. “I really want to do a show actually about oil, because obviously this is a truck, and it’s dependent on this whole other system and network,” she says. Part of that system is finding places where the truck can physically exist and people can visit it.

In a city where parking always seems limited, Moss says that many brick-and-mortar art spaces have been “really generous” in offering up places park the mobile gallery. Gas Gallery previously set up shop outside of Night Gallery and will be outside The Pit in Glendale through the run of Liquid Love. Each exhibition features an opening party at its home base location, and Moss also hopes to organize more pop-ups—recent ones include visits to LAVA projects in Alhambra and Other Places Art Fair in San Pedro—and to include more performances.

Keep your eyes out for this rolling art space because it might head to your neighborhood next.

RELATED: Step Inside an Otherworldly Psychedelic Cave 1,000 Hours in the Making

5 of the Hottest Art Galleries to Visit in Los Angeles