Home Film The Last Time the Oscars Didn’t Have a Host All Hell Broke... 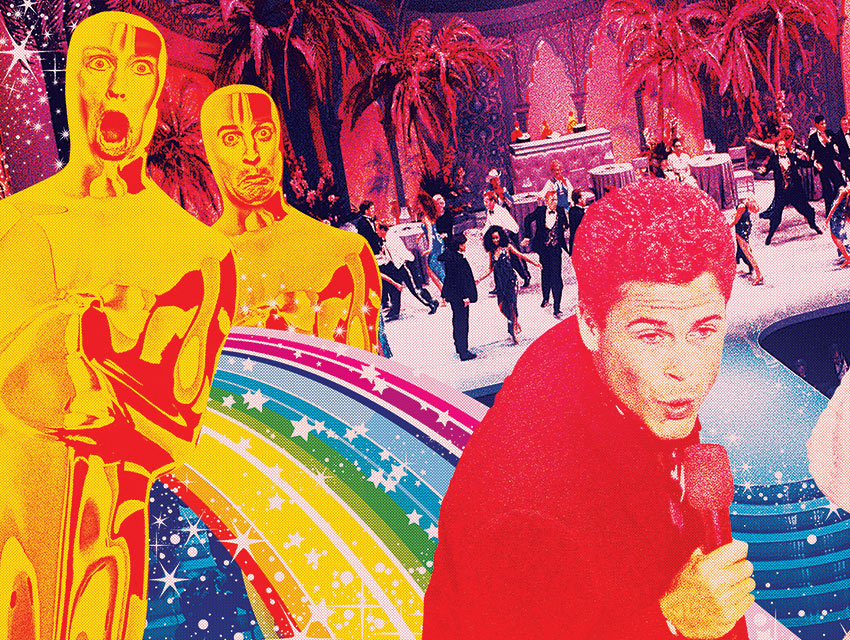 On the evening of March 29, 1989, a young woman dressed as Snow White jogged on tippy toes into the lobby of the Shrine Auditorium, feigning dimwitted bewilderment. “Can you tell me how to get into the theater?” she squeaked to Variety columnist Army Archerd. “That’s easy, Snow,” he said, gesturing toward some women in unwieldy-looking cardboard costumes. “Just follow the Hollywood stars!” She did—and then all hell broke loose.

It’s been almost 30 years since that Oscars ceremony, and it’s still considered the biggest disaster in the award show’s history. Snow White’s entrance was followed by a grueling 12-minute musical number with dancing tables and chairs, Rob Lowe singing “Proud Mary,” and lots of other things that made the audience visibly want to die.

This year—for the first time since that beautiful, glittering car crash three decades ago—the Oscars will not have a host. In a piece published yesterday, Variety reported that it was told by Academy insiders that the show will move forward without a master of ceremonies at the helm: “Barring an eleventh-hour pivot by the Academy—in the event that a superstar host materializes—the show producers are moving forward with a broadcast that will focus on starry skits and play up a high-profile year for music in film, thanks to likely nominees Lady Gaga, Dolly Parton, and Kendrick Lamar, one individual involved with the show said.”

Back in 2010, we published a long excerpt about the so-called “worst Oscars ever” from Robert Hofler’s book Party Animals: A Hollywood Tale of Sex, Drugs, and Rock ‘n’ Roll Starring the Fabulous Allan Carr. Carr, who produced Grease and some less successful stage and movie musicals, was haunted by the disastrous ceremony until he died of liver cancer ten years later. It begins:

“When the opening number of the 61st Academy Awards popped up on YouTube, it made a splash—even though it was almost 20 years old. For those of you who don’t remember the 1989 telecast, it was a surreal spectacle indeed, marked by an earsplitting duet by a tone-deaf Rob Lowe and a no-name actress dressed as Snow White. The 12-minute performance was so deliciously, remarkably bad that 1 million people watched it online in a single day. It was just more proof that the show was, and remains, the worst Oscars ever. This is the behind-the-scenes story of that rudderless evening—and of the flamboyant producer whose life it ruined.”

Hofler’s blow-by-blow of the evening, as told by the people who worked on and attended the show, is a dread-inducing but totally fascinating read. The producers of this year’s ceremony might want to give it a look here.

RELATED: The Oscars Have Never Had a Latinx or Asian-American Host—Here Are 7 Suggestions

The Oscars Didn’t Need a Host After All