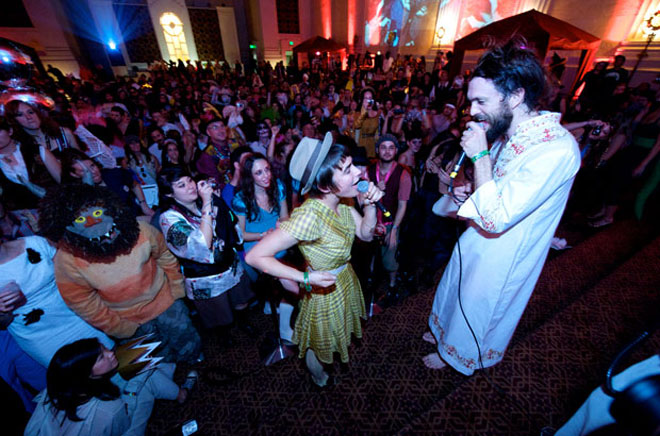 It’s the last weekend before Halloween and that means it’s a weekend packed with costume balls, haunted houses, corn mazes, freaky films, and more scaretastic events. So technically that’s more than 16 events (lots more) but who’s counting when it’s this much fun?

EAT: Sriracha Festival
Do we need another reason to celebrate our beloved rooster sauce? No, but we’ll gladly take one. Nearly a dozen L.A. chefs gather under one roof to cook their hottest Sriracha-themed dishes. Live music, local craft beers, and cocktails help sweeten the deal. More information (October 27; Lot 613)

HEAR: They Might Be Giants
In the afternoon show, these superstars of children’s music will likely draw on their Grammy-nominated Here Comes Science and the Grammy-winning Here Come the 123s. In the evening, the band celebrates 30 years together crafting unique and outlandish pop with the release of their 16th studio album, Nanobots. More information (October 26; Royce Hall)

SEE: The Power of Photography: National Geographic 125 Years
Among all the Instagram auteurs, these lens masters dominate the art form. Explore more than 500 images from around the globe. More information (October 26; Annenberg Space for Photography)

RUN: Rock ‘n’ Roll Los Angeles Half Marathon
For all those that believe they’re incapable of tapping into the forever-elusive “runner’s high” myth, The Rock ‘n’ Roll Half Marathon is here to prove you wrong. You’ll reach euphoria, but who’s responsible: the endocannabinoids or the thrashing sound waves? More information (October 27; L.A. Live)

EAT: Sausage Fest
It really is a sausage party as chef Ray Garcia of FIG gather half a dozen of his pals—including chefs Kris Morningstar, Christian Page, and Bernhard Mairinger—for a cookout with tubed meat as the star. More information (October 27; FIG)

HEAR: Boy
Despite the name Boy is comprised of two girls (one Swiss, one German) who sing smart, optimistic pop in English. It’ll bring a smile to your face. More information (October 26; Fonda Theatre)

SEE: SuicideGirls: Blackheart Burlesque
After a 6-year hiatus, the saucy show is back with stripteases that lampoon Game of Thrones, Planet of the Apes, and Dr. Who. More information (October 26; House of Blues, West Hollywood)

EAT: L.A. Grub Crawl
Bon Appétit hosts two food crawls, one in the afternoon in Venice and another in downtown in the evening, featuring some of the magazine’s top local restaurants including Alma. More information (October 26; various)

EXPERIENCE: Day of the Dead
What better place to celebrate the Mexican Day of the Dead than Olvera Street? After a procession and blessing, you can peruse the elaborately decorated altars while sipping cinnamon-tinged hot chocolate. More information (October 25-November 1; Olvera Street)

HEAR: Kanye West
The producer, performer, and musician who likes to compare himself to Jesus, hits town for two shows in support of his latest album, Yeezus. More information (October 26 & 28; Staples Center)

What’s On in L.A. This Weekend: Nights Of The Jack, Bad Bunny, CatCon