Home Uncategorized 15 Fun Things to do This Weekend in L.A.: Bicycles, Tacos, Bands,... 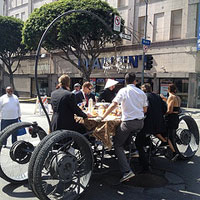 Whether you want to watch a drag performance, listen to a slinky soul duo or ride a bike down Wilshire Blvd., there are a million ways to spend your weekend in Los Angeles. Here are 15 of them.

RIDE: CicLAvia
Contemplate life without cars as you traverse L.A. Starting near the ornate buildings of downtown’s historic core, riders make their way to the Miracle Mile, where they can wave to the poor mastodon stuck in the tar pits. More information (April 6; DTLA to Mid City)

SEE: Bicycle Film Festival
Two days of bicycle themed shorts and feature-length films comprise this festival as it rolls into L.A. Tickets are available for individual films or grab a weekend pass to catch them all. It’s the perfect activity for a CicLAvia weekend. More information (April 4-5; Aratani Japan America Theatre)

EAT: ¡Taco Madness 2014!
For culinary conquistadors racked with taco fever, Los Angeles is paradise. Discover the finest local purveyors of the staple at this festival of music and masa, and watch as a panel of foodies crowns a taco king. More information (April 5; Masonic Lodge at Hollywood Forever)

STEP: Fight for Air Climb
Stairway to heaven—or heaving? The journey of a thousand stairs begins with a single step. Race to the top of downtown’s 62-story skyscraper for the American Lung Association’s signature benefit. More information (April 5; Aon Center)

SEE: Dodgers Opening Day
It’s time to hear the crack of the bat and smell the aroma of hot dogs when the home team faces off against its notorious rivals, the San Francisco Giants. More information (April 4; Dodger Stadium)

SEE: North American Tree Climbing Championships
Climbing trees is no longer just for rowdy kids. This competition combines safety and nature education with a fun physical activity for climbers from all over the U.S. and Canada. The climber who claims victory in Pasadena will advance to the national competition in Wisconsin later this year. More information (April 4; Brookside Park Pasadena)

SEE: Kurt Cobain Photography Exhibition
Rare and highly sought after photos by Jesse Frohman show the legendary grunge icon during his final days in New York in 1993. This exhibit is the love child of the New York-based Morrison Hotel Gallery and Dream Downtown, partnering to bring the legendary photos to Los Angeles. More information (April 4-May 6; Morrison Hotel Gallery)

SEE: Slaughterhouse 5
Champagne, mimosas, and coffee will flow at this screening of Kurt Vonnegut’s cult-novel-turned-classic-movie. The film tells the story of Billy Pligrim as he chaotically juggles lives in the past, present, and future. More information (April 5; Art Theatre Long Beach)

HEAR: Fitz and the Tantrums
The Los Angeles neo-soul/indie pop group return from touring with Bruno Mars to headline their own gig. The quintet will perform music from its 2010 breakout album, Pickin’ Up The Pieces, and the more recent More Than Just A Dream collection. More information (April 5; Hollywood Palladium)

SEE: American Contemporary Ballet/Dance+Design II
The focus is on Fred Astaire’s “I’m Old Fashioned” for the second of the two-part Dance+Design 2014 program, The Best in a Century, which explores 20th-century dance masterpieces. The performance is accompanied by live music, with a reception and the opportunity to meet the dancers and musicians afterward. More information (April 5-6; 5900 Wilshire building annex)

CELEBRATE: 16th Annual Festival of Film Noir Closing Weekend Party
To close out its annual film noir festival, the Hollywood theater will celebrate with a retro shindig. Dress in your snazziest vintage attire, whether you’re playing a femme fatal, a wry gumshoe, or a greedy mobster. The party includes food, film, cocktails, live music, dancing, and plenty of casino games. Try to keep the murders to a minimum. More information (April 2; Egyptian Theatre)