Home Film 14 Ways to Celebrate Valentine’s Day in L.A. That Don’t Include a... 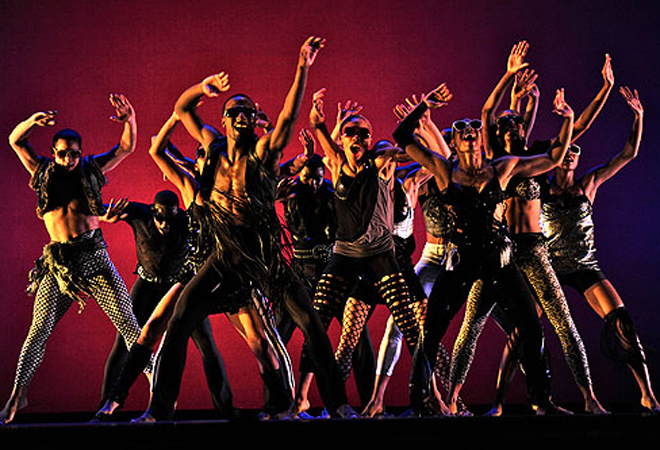 James Brown: Get on the Good Foot, A Celebration in Dance

Bored of fancy dinners, flowers, and chocolates? Here are 14 ways to celebrate February 14th, from luchadors and fake proms to a shame-mining storytelling session and a James Brown-themed dance party. Proof that Valentine’s Day isn’t for lovers only.

LA Influential
Fall in love with L.A. all over again with a classy night at the Los Angeles Chamber Orchestra. Three prominent artists will share stories of how living and working in L.A. has shaped their art.
When: February 13, 7:30 p.m.
Price: $50

Love, Mathematics and The X-Files: Edward Frenkel and Chris Carter
Calculus and sexual chemistry collide as Berkley mathematician Edward Frenkel discusses his book Love and Math: The Heart of Hidden Reality with The X-Files creator Chris Carter, the man responsible for Scully and Mulder’s steamy workplace dynamic at the Mark Taper Auditorium.
When: February 13, 7:15 p.m.
Price: Free with reservation

Fall in Love with Lucha VaVOOM
Catch the surprisingly sensual combination of striptease and Mexican masked wrestling in Lucha VaVOOM’s annual Valentine’s show at the Mayan.
When: February 12 & 13
Price: $35

Got Funky Sole: Lover’s Edition
The soul-spinning vinyl-centric Funky Sole has been serving up ’60s jams at the Echo for years. For this event the DJ crew is joined in Grand Park by the Breakestra, a hip-hop big band that deconstructs rap samples by playing the original songs.  A full bar and food trucks complete this romantic night out under the L.A. sky.
When: February 14, 8 p.m.
Price: Free with reservation

80s Prom
For those who never got their prom moment of glory The Standard, Downtown L.A. is offering a second chance with a night of drinks, music, and dancing. Wear your best 80s prom garb for the chance to be crowned prom queen or king, both of whom will win a free night’s stay at the hotel.
When: February 14, 8 p.m.- 11 p.m.
Price: $20

Spiritualized
A choir and full orchestra will accompany British rockers Spiritualized as they play their entire 1997 album Ladies and Gentlemen We Are Floating In Space. The performance will mark the debut of the new theater at the downtown Ace Hotel, which just opened in January.
When: February 14, 9 p.m.
Price: $59-169

James Brown: Get on the Good Foot, A Celebration in Dance
The Philadelphia Dance Company pays tribute to the enormous influence of James Brown, showcasing many of the musician’s classics accompanied by dances from a global array of choreographers at The Music Center.
When: February 14-15, 7:30 p.m.; February 16, 2 p.m.
Price: $28-$110

House of Cards Season 2 Release on Netflix
For the couple that’s already comfortable with each other and more inclined to order Thai food and collapse on the couch, nothing says love like binge-watching an entire season of the political drama. Break out the wine and prepare for a big night of backstabbing, ruthless maneuvering, illicit affairs, and coverups as season two of House of Cards debuts on Netflix on February 14.

My Mondo Valentine
Having carefully pillaged obscure movies and vintage cinema gems, Cinefamily presents their signature Mondo night in which the wildest and most ridiculous love-themed clips have been edited together and will be screened for your cringe-inducing pleasure. The treasures include sexy ads, homemade movies, and vintage “how to” videos.
When: February 14, 9:45 p.m.
Price: $12

I Art You
Nonprofit arts organization Create:Fixate presents a night of more than 30 mixed medium artists and local musicians at Lot 613 in downtown, complete with a singles mixer organized by a Beverly Hills matchmaking company and an adult friendly Valentine card station.
When: February 15, 7 p.m.
Price: $15 before 9 p.m., $20 after

I Hate Valentine’s Day Dance Party
The Bootleg Bar & Theater hosts a comedic dance party for couples that are looking for something offbeat and singles that are ready to mingle. Hosted by comedian Melinda Hill, the organizers promise that you’ll laugh, cry, and dance your booty off.
When: February 15, 6:30 p.m.
Price: $10

Romantic Encounters Live
Improv theater iO West hosts a plethora of comedians sharing their most outrageous, shameful, and hilarious romantic encounters. It’s the perfect post-V-Day tonic—and a chance to see how your own experiences measure up.
When: February 17, 8 p.m.
Price: $10