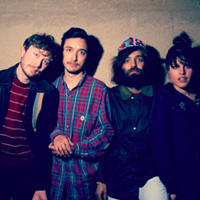 Jazz at the Bootleg Bar, strings at the Echo, big band brass at Club Los Globos, February is an odd month in Los Angeles residencies. Figure out where to go and who to see with this long list of who’s playing where during the year’s shortest month.

SUNDAYS
Miriam Bryant at the Bootleg Bar (February 9, 16, 23)
The singer/songwriter is in the midst of a big push to for her single with EDM producer/DJ Zedd and vocalist Matthew Kona, “Find You.” Her debut EP, Push Play, is available on Interscope and she performed for one of the biggest crowds in the history of hipster showcases at It’s a School Night on February 3 at the Avalon.
Think: A soul singer in an electronic age; the aural equivalent of Scarlett Johansson wandering Tokyo aimlessly in Lost In Translation
Listen: via Spotify
Cover: Free

MONDAYS
Busy Living at the Satellite (February 3, 10, 17, 24)
The members of Busy Living mixed an EP in 2013 that has yet to see the light of day, but the first single, “Lie Better,” dropped in January to positive notices. While the band has performed with other resident bands previously, it has never held down a full month at the top of the bill until now.
Think: The soundtrack to a car commercial that centers on a day at the beach
Listen: via Soundcloud
Cover: Free

Kera and the Lesbians at The Echo (February 3, 10, 17, 24)
The L.A.-based band released its EP, Year 23, online at the end of January and in cassette form via Lollipop Records on February 3. The leading purveyors of “bipolar folk” draw influences from the California sun (“Year Past 23”), New Orleans jazz (“Nailbiter”), and the lowest of lo-fi indie rock (the vocals on “Gypsy Song”).
Think: A world music sampler that’s either “eclectic” or “scattershot” depending on the listener
Listen: via Soundcloud
Cover: Free

The New Electric Sound at Silverlake Lounge (February 3, 10, 17, 24)
The five-member band, originally from Utah, released its debut album in 2012. Over the past month, it’s been in its snowy home state, playing shows connected to the debut of Google Fiber in Provo. It will not be bringing the hyper-fast Internet service back with it.
Think: If the Beach Boys had been raised on Weezer records rather than vice versa
Listen: via Spotify
Cover: Free

Kan Wakan at Echoplex (February 3, 10, 17, 24)
Since its February 2013 residency at the Echo, the group has continued to prepare for an album release (now set for late spring), has lined up gigs at South by Southwest in March, and signed with Verve Records. Not bad for a group that performed its first live gig in late 2012.
Think: Fiona Apple singing in front of a classical quartet
Listen: via Soundcloud
Cover: Free

Kris Bowers at the Bootleg Bar (February 17, 24)
The Bootleg is a great venue to play, but Kris Bowers’ first date there will come 16 days after playing the Kennedy Center. Forgive him if he doesn’t seemed awed by the Beverly Boulevard standby. He was named one of iTunes 2014 Artists to Watch and his album, Heroes + Misfits, is due out March 3.
Think: Traditional jazz piano dragged into the 21st century.
Listen: via Soundcloud
Cover: Free

TUESDAYS
The Belle Brigade at The Echo (February 4, 11, 18 and 25)
The L.A.-based sibling duo heads into a month of performances at The Echo on the verge of releasing its new album, Just Because. The first single from the collection, “Ashes,” was featured as KCRW’s “Top Tune” on January 29, and the LA Times said the group’s first album featured “a dozen California pop gems.” This will likely be the most high-profile residency in February.
Think: A stripped-down Fleetwood Mac
Listen: via Spotify
Cover: Free

Hudson at Viper Room (February 4, 11, 18, 25)
The five-piece band centered on lead singer/songwriter David Hudson extends its January residency into February with four more performances. In between paying the Viper Room, Hudson has also hit the House of Blues and ventured into Orange County.
Think: Anthemic pop that would have felt at home on a Dishwalla or Goo Goo Dolls album
Listen: via Soundcloud
Cover: $10

Urban Renewal Project at Club Los Globos (February 25, March 4, 11, 18 and 25)
The big band revivalists may be short on songwriting chops (debut album Go Big or Go Home has nine tracks including unnecessary remakes of “Where Is My Mind?” and “Feel Good Inc.”), but the energy of a brass section in a live setting should never be underestimated.
Think: The leftovers of the late-‘90s swing music revival
Listen: via Spotify
Cover: Free

WEDNESDAYS
Matthew Stevens at Blue Whale Jazz (February 5, 12, 19, 26)
The New York jazz guitarist makes his way to Los Angeles in advance of his debut album for Concord Records. He’s played everywhere from the Hollywood Bowl to the Kennedy Center, along with The Blue Note in New York, Tokyo, and Milan—an amazing feat for a jazz musician under the age of 35. His most noteworthy song to date might be a cover of Drake’s “Marvin’s Room,” which came under the auspices of jazz supergroup NEXT Collective.
Think: Any style he wants to play that night.
Listen: via Soundcloud
Cover: $15

Mother Falcon at The Echo (February 5, 12, 19, 26)
How many of the orchestral pop troupe’s 22 members will make the trek from Austin to Los Angeles is in question, especially considering the small size of The Echo’s stage. The band will also have a unique setup during its residency: Mother Falcon will headline the first two nights, then act as support act to Jukebox the Ghost (February 19) and ex-Miracle Legion frontman Mark Mulcahy (February 26).
Think: Big, sweeping cinematic pop
Listen: via Soundcloud
Cover: $10 (February 5, 12), $15 (February 19), $12 (February 26)

WASI at Silverlake Lounge (February 5, 12, 19, 26)
For the last year, the duo formerly known as We Are/She Is has been playing at nearly any space that will have them, whether in L.A., San Diego, or the Inland Empire. A new single has been promised for early 2014—so any day now.
Think: If “Closer”-era Tegan and Sara had grown up with a stack of The Clash LPs.
Listen: via Soundcloud
Cover: Free

Distant Cousins at Hotel Café (February 26, March 5, 12, 19, 26)
Listeners who haven’t seen the L.A. trio live may have heard its music; songs by the Cousins have appeared on “Graceland,” “Criminal Minds,” and the MLB All-Star Game. The February/March residency should feel like home for the band, which plays regularly on the Hotel Café stage.
Think: Somewhere between fun. and Mumford and Sons
Listen: via Soundcloud
Cover: TBA

THURSDAYS
Roman Remains at the Sayers Club (February 6, 13, 20, 27)
The London duo comprised of Duke Spirit members Liela Moss and Toby Butler has made waves in its short existence, to the point where Dhani Harrison is putting out the band’s debut album, Zeal, on his own label on March 4–and playing keys with the band at the Sayers Club. The residency is a warm-up for an upcoming tour, which finds the band opening for Gary Numan.
Think: Industrial music ready for the nightclub–and for EDM remixing
Listen: via Soundcloud
Cover: Free