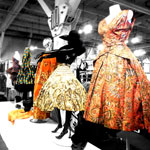 The weather has cooled down but the activity calendar is all booked up.

SEE: Einstein on the Beach
Painting an impressionistic portrait of the bushy-maned physicist, the opera—composed by Philip Glass, directed by Robert Wilson, and choreographed by Lucinda Childs—makes its L.A. debut. More information (October 11-13; Dorothy Chandler Pavilion)

SHOP: Artisanal L.A. Fall Show
Artisanal L.A. is setting up shop for its second fall show just in time for the holidays. The event will feature a range of panels and workshops on subjects such as tea making, sriracha, and biodynamic agriculture, as well as art installations and book signings. Nabbing tickets in advance is encouraged. More information (October 12-13; L.A. Mart)

SEE: Latino International Film Festival
The Los Angeles Latino International Film Festival is a five-day celebration of Latino filmmaking held in the heart of Hollywood. The festival presents its collection of features, documentaries, and shorts, but you can also attend workshops, panels and lectures, and Q and A sessions following each screening. More information (October 10-14; TCL Chinese Theater 6)

COMB: Los Angeles Facial Hair Society’s First Beard and Mustache Competition
Hirsute hipsters and strident supporters of ‘staches will have plenty to corw about as they judge contestants’ facial hair in eight categories. It all goes down in a  North Hollywood bar. More information (October 12; The Federal)