Home Holiday 13 Ways to Spend Your Last Weekend Before Halloween 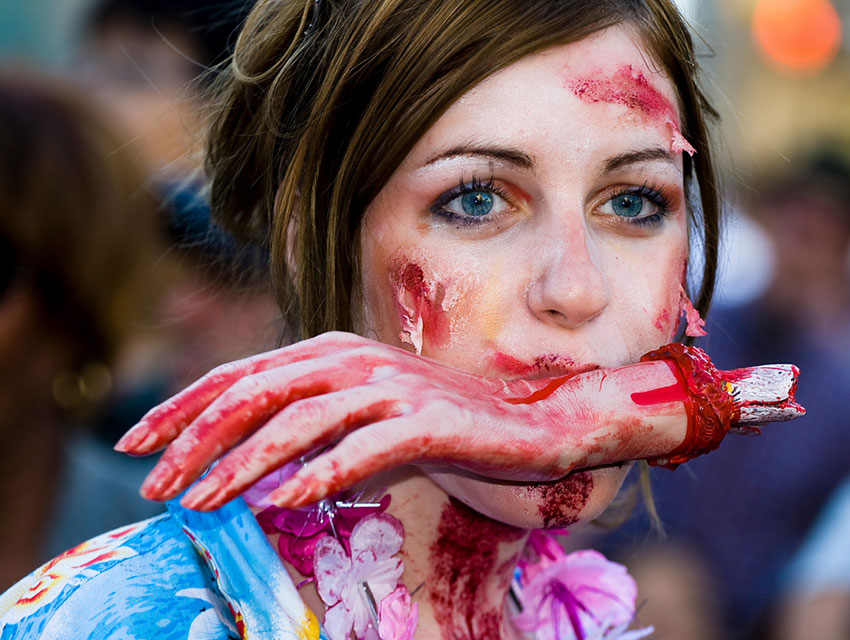 Sure, you like candy corn and pumpkins as much as the next red-blooded American, but you also like to be a citizen of the world, or at least of this city. And if you want more hot Halloween Dia de los Muertos vents, we’ve got you covered.

LAUGH: Festival Supreme
Shrine Expo Hall & Grounds
October 25
Some festivals offer you’re a lot of music and a little comedy; this one, organized by the rocktackular bros of Tenacious D, flips the script. Joke slingers like Maria Bamford, Kumail Nanjiani, and the State are the headliners of a day-long fest that also includes a haunted house, a short film festival, and performers such as Peaches and the Haden Triplets. More information

EAT: Eat to the Beat & Trick or Treat
Grand Central Market
October 25
In addition to free face painting, costumed visitors will score free treats from market vendors including Sticky Rice, Horse Thief BBQ, DTLA Cheese, Olio GCM Wood Fired Pizzeria, and more. All of this is second to the entertainment, which includes a super lineup of local DJs chosen by dublab and a costume contest at 4 p.m. More information

CELEBRATE: Night of the Living Zoo
The Los Angeles Zoo
October 24
Claw your way to the Los Angeles Zoo for a howling good time at this frightful pre-Halloween costume bash for adults (21+). The L.A. Zoo transforms itself into an stage for mysterious and macabre delights with hair-raising decorations and special effects. More information

HEAR: Marketa Irglova
The Hotel Cafe
October 24-25
The female half of the Swell Season from the hit movie Once has a luminous new solo album, Muna. More information

HEAR: Erasure
Hollywood Palladium
October 24
After nearly 30 years and 16 albums—their most recent The Violet Flame came out last month—audiences just can’t get enough of Andy Bell and Vince Clarke are still at it. More information

SEE: Dusk-to-Dawn-Horrorthon
Aero Theatre
October 25 – 26
Peet’s provides the coffee at an all-night festival of scary cinema. Between movies, there will be free food, giveaways, trailers, and surprises. Films include Creepshow, Zombie Holocaust, and The Thing. More information

HEAR: Hall and Oates
The Greek Theatre
October 26
Not-so-private eyes (maybe yours) are watching them. Daryl Hall (the one with the blonde hair) and John Oates (the one with the ‘stache), play their hits from the ’80s. Wo-oh, here they come… More information

HEAR: EEK! At the Greek!
The Greek Theatre
October 25
Led by maestro Arthur B. Rubinstein the 60-piece Symphony In The Glen Orchestra will play a creepy collection of musical favorites. More information