Home Uncategorized 12 Things to Do in L.A. this Weekend: Ugly Sweaters, Sock Puppets,... 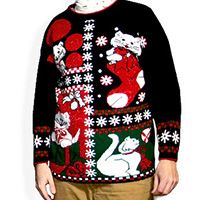 Five days ’til Christmas and there’s so much to do—in Los Angeles. Wassail the weekend away with these festive activities.

MOVE: Ugly Sweater Run
Pull out that hideous thing that grandma knitted for you all those winters ago and wear it proudly as you run around Chinatown. More information (December 21; Los Angeles State Historic Park)

SEE: Coffeegraph
The three-week series of events dedicated to the jitter juice culminates at a party on Saturday where coffee slingers from Caffe Vita in Silver Lake will make drinks, while artist Avi Roth, who makes abstract art out of coffee ground, will discuss his process. The bands Chasing Shade and Seneca & the River will also perform. The event is free but you should RSVP. More information (December 21; Think Tank Gallery)

SEE: The Nutcracker/South Bay Ballet
The Torrance ballet school trains its students as if they were in a professional company, and many have gone on to perform with American Ballet Theatre, the Joffrey, and other world-famous troupes. No surprise that the holiday staple gets the full treatment here, with stellar dancing and elaborate costumes and sets. More information. More information (December 20-22; El Camino College Center for the Performing Arts)

HEAR: Merry MeXmas
Rockabilly queen Rosie Flores and El Vez, the Mexican Elvis, bring their spirited Merry MeXmas show to town. Expect to hear some serious honkin’ and tonkin’ from Flores, whose ’70s band the Screamin’ Sirens has helped keep the punkbilly scene alive. Back in the ’80s, Robert Lopez was a founding member of the Zeros, one of East L.A.’s first punk bands, but he’s best known for his pompadoured persona El Vez. Reformulating Elvis and David Bowie tunes to sympathize with the Latino struggle, he adds layers of meaning—and fun—to an interactive show that’ll get you tuned up for the holidays. (December 21; La Cita)

SEE: Sock Puppet Sitcom Theater
Enjoy the sight of sock puppets acting out a classic episode of a popular TV show (they’ve done everything from Three’s Company to The Simpsons), complete with sound effects and fake commercials. More information (December 21; The Echo)

EXPERIENCE: Winter Solstice Sound Bath
Forget the Integratron. Far-out healers Jamie Ford and Mary Frances Spencer spread good vibrations meant to cleanse the spirit and help you interface with the infinite. If nothing else, their sonic frequencies (usually dished out on quartz bowls) are the perfect soundtrack for a good nap. More information (December 20; Center for the Arts Eagle Rock)

HEAR: A Swingin’ Christmas: The Count Basie Orchestra
Standards are jazzed up in the hands of the hippest cats from New York City. Expect energetic holiday songs and vintage cuts from the Basie catalog. More information (December 23; Disney Hall)

EAT: Breakfast with Santa
Standing in line at the mall for a photo with Santa isn’t much fun. Instead, bring the whole family downtown for breakfast with St. Nick. The Mark Taper Forum dishes out a breakfast spread ($55 per adult; $25 per child). Games and gifts round out the morning with the season’s jolliest fellow. More information (December 21-22; The Music Center)

HEAR: Merry Minstrel Musical Circus
Mike Campbell (guitarist for Tom Petty & the Heartbreakers) and local musician Jonathan Wilson will host the second annual holiday “jamathon.” They haven’t revealed yet who this year’s performers are, but if last year is any indication—Jackson Browne, Bob Weir, Jeff Lynne and Benmont Tench—it’s going to be two nights of memorable musical camaraderie. All proceeds from the concert will buy musical instruments for Manual Arts High School and medical care for furry friends from the Tazzy Animal Rescue Fund. More information (December 20-21; The Troubadour)