Home Uncategorized 12 Things to Do Before New Year’s in L.A.: Shepard Fairey, Twisted... 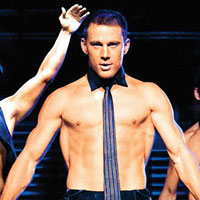 Whether your dream hunk looks like Channing Tatum, Jimmy Stewart or a cross between the two—George Bailey’s ethics plus Tatum’s abs—we’ve got you covered. We’ve also got a few suggestions for New Year’s Eve.

SEE: Twist Your Dickens
Joe Flaherty (Freaks and Geeks) stars as Scrooge, while MADtv’s Frank Caeti, According to Jim’s Larry Joe Campbell, The Simpsons’ Dan Castellaneta, and other familiar faces round out the ensemble in a humorous retelling of A Christmas Carol, which features improv sketches and characters written specifically for the cast. More information (Through December 29; Kirk Douglas Theatre)

EXPERIENCE: Reindeer Romp
The popular Reindeer Romp is back at the L.A. Zoo this year. Come meet Santa’s reindeer, enjoy the decorations, and holiday-themed arts and crafts, at this fun family friendly event. Santa himself will be available for photos during the weekends. More information(Through January 2; Los Angeles Zoo)

SEE: Vivian Maier
For 40 years Vivian Maier was an unassuming nanny with a secret hobby. After she died in 2009, scores of undeveloped film canisters were found in her apartment, revealing her extraordinary eye for photographing street scenes. Despite a lack of formal training, the secret master is finally getting her due. More information (Through January 25; Merry Karnowsky Gallery)

SEE: Lawrence of Arabia
Some movies are made to be seen on screen and this desert epic is one of them. Recently deceased Peter O’Toole stars as “megalomaniac T. E. Lawrence, the eccentric British intelligence officer who became a legend by uniting the Arab tribes against the Turks during the first World War and going insanely native in the process.” More information (December 29; Egyptian Theatre)

SEE: It’s A Wonderful Life
You have to do it at least once in your life—watch It’s A Wonderful Life during the holiday season, that is. In a tale that may have particular resonance for those hit hard by the mortgage and/or financial crises of the last five years, Jimmy Stewart stars as George Bailey, an everyman trying to keep his small town bank from going under. After years of sacrificing his dreams so that his friends and family could prosper, he is on the brink of suicide. It doesn’t sound like a pick-me-up, but it is. More information (December 29-30; Cinefmaily)