Home Uncategorized 11 Questions for Lou Barlow (Oh, and Sebadoh has a New Album) 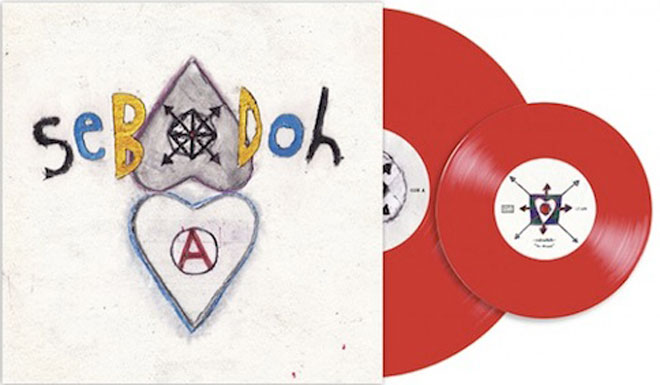 Yesterday, the new Sebadoh album came out—a fact that might prompt you to ask: What year is it? Not 1993… or even 2003… but 2013. The trio of Lou Barlow, Jason Loewenstein, and Bob D’Amico has released Defend Yourself, Sebadoh’s first record in 14 years. (Though it’s not like any of them have been inactive.) And it’s good—13 tracks of straightforward guitar rock, many of them shot through with the angst and exhilaration concomitant with a relationship’s aftermath. Defend Yourself sounds like the Sebadoh of old, a consciously lo-fi album somewhere between Bakesale and Harmacy. Just three dudes with a bass, a guitar, and a drum kit.

For many years, Barlow was a Silver Lake resident. These days, he lives in the Rampart district not far from the original Original Tommy’s. Sitting at the kitchen table of his rambling house, he discussed his improving social skills, rock and fandom, and why he’ll gladly play the same song every night for the rest of his life.

This is the first Sebadoh album in 14 years. Why now?
The timing was right. It just seems very natural to me when I play with Jason and Bob. We had spent three or four years touring on old Sebadoh stuff. It did kind of remind me: This is good, this is not bad. I spent a lot of time in the ’90s challenging my own beliefs. I had the Folk Implosion, I had solo stuff after that. I was always challenging this idea of guitar, vocals, bass, and drums–trying to change it or tweak it.

Had you guys already written the songs or did you write them as you were playing together?
It depends from song to song. Jason had pretty formed songs. I had melodies and guitar chords that I brought to the band for my songs. There’s six songs that are mine, I think: the first two [“I Will,” “Love You Here”] and “State of Mine.”

“Love You Here” I constructed for the band. I had two loose ideas, and I thought it would be great to see what Jason and Bob could do with them. I didn’t really finish any of the things lyrically until we’d actually play them. That’s not totally true. There’s one song, “Let It Out,” that I had for a while; I was waiting to figure out what to do with it. The other ones, I left in this nebulous place where I knew they could form. I knew for them to really take shape I needed to play them.

Does touring feel different now than in the ’90s?
Yeah, because we’re so much smarter now. I think with kids who have their rock blinders on, they’re like, “I’m not a rock star. But I am a rock star! But I don’t know if I am a rock star!” Now, we walk into a club and we say, “Hello, my name is Lou. What’s your name?” There’s no pretension to it: You walk in, you introduce yourselves to the people you’re working with, you talk about how to make it a good show.

I think ’90s indie rock was steeped in a very particular ethos. You had to stridently not want to be a rock star—except you kind of did.
I know. It was a very confusing time. Because it was like that. It was like, “No, we’re just like everybody else.” But you know what? People don’t really want you to be like them. I would try to be my normal, sarcastic self and people would be like, “I can’t believe he said that to me.” The fan/band relationship is intense. It’s hard to find the right balance. I think I find it more now that I’m older. When I was younger, it was harder to be secure—because I wasn’t.

Do you think that’s partly because your fans have matured along with you?
Maybe. I’m hoping it’s all new, young fans. I’ve had that experience with Dinosaur Jr. where it’s just kids who are like, “Whoa! What’s this?” We actually have a great relationship with our aging fans. The ones who actually come to the shows, we’re friends. We’ve been through it. I’m not really a fetishist for the ’90s. I think what we have now is what we have. And it’s all good.

Do you ever get tired of playing the same songs night after night?
Never. I never do. It always mystified me when people were like, “I don’t want to do this anymore. I don’t feel this song.” I have what I would like to think is an old-school attitude. Dean Martin never complained about playing. If that’s the hit and people like it, I’ll play it forever. I wouldn’t be like, “I don’t identify with this song. I’m just not feeling it.” It’s bullshit. If I write a song, I write it to be sung forever. Yes, it’s an impression of a certain time in my life. Yes, it means certain things. Yes, it evokes certain memories. But when you present that to an audience, it becomes their song.

If you want it to be yours then don’t ever release it. I’m not a very traditional performer. I’m a terrible performer. But if you do something and you put it out into the world, I’m sorry, but it’s not yours anymore. You’ve given it to somebody else. They attach meanings to it. You have to respect the meaning those people gave to it. You can’t disrespect your fans.

Any bands you’re digging?
I love The Oh Sees. A lot of Ryan Adams. I just love people who are passionate about what they do. I always have my ears open. When I hear passion in music, that’s it.

KXLU would be my favorite radio station except they don’t back-announce most of their stuff. Even if they do, there’s already been nine songs so you can’t pinpoint it. They’re playing some new fucking vinyl record some kid dropped. It sounds great but you’ll never know what it is. It’s agonizing!

That’s where Shazaam comes in.
Shazaam only works on Hot 92.3, which is my favorite radio station right now. It’s old school R&B. I found a bunch of stuff I’ve never heard on that.

How do you like your new neighborhood?
It’s unexpectedly quiet. We have a rooster that crows at 4 a.m. Which is kind of cool. This neighborhood is reminding me why I love Los Angeles.

When you go to New York, Philadelphia, Boston, there’s people stacked on top of each other 10, 20 stories high. You don’t have that in Los Angeles. It’s a huge sprawl of houses. Where people live their lives. The deeper I get into Los Angeles, the more I get into what it actually means. We know about Hollywood and all the money that’s here, but you can live here on not a lot of money.

I think of Los Angeles as a city of neighborhoods stitched together. You might know one pocket well, then go to another one and know nothing about it. That’s why people have trouble accessing it.
This isn’t very far from where I had a house in Silver Lake. When I came down here I was like, this is great. There are these amazing houses everywhere. It’s kind of astounding. I’m going through an intense period where I’m like, “Can I stay here? Can I afford this? Is this going to happen?” I’ve been here 16 years and I don’t know if I’m ever going to really be ready to let go of this place. Ever. It still amazes me and it still pleases me in really subtle ways.