Home Uncategorized 108 Guitars of the Gods 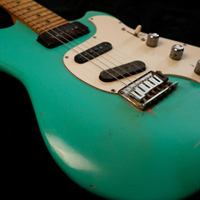 For rock stars, a guitar isn’t merely an instrument, it’s a sacred object, a significant other, an encyclopedia whose every scratch, dent, and scrape tells a story. In photographer Lisa S. Johnson’s new book 108 Rock Star Guitars, she presents a visual document of the six-strings that have been wielded by the fines axe slingers. The process of wrangling these rock and rollers was like herding cats, so the project took 17 years. Johnson stuck with it and found enough musicians who were willing to part with their babies for a photo shoot.

The strings of Led Zeppelin’s shine on Jimmy Page double neck SG. Slash’s 1987 Gibson Les Paul with a  sunburst finish bears scars and what looks like a cigarette burn. Keith Richards’ 1952 Gibson ES-350 has deep cuts in the pick guard. Some instruments are outlandish like Ace Freely’s “UFO” guitar, adorned with lights that make it glow, and Wayne Kramer’s American flag Fender Stratocaster. Other guitars are showcased as though they’re ancient illuminated manuscripts. The book itself is leather-bound like a bible with gold leaf pages.

The foreword comes from no less than Les Paul who wrote it just months before he passed away in 2009: “I remember the first black-and-white pictures Lisa took of my guitars and those

of my band members. I still knew her only as ‘the girl who does that guitar art’ and she went about her business quietly, almost anonymously… I never could have guessed that she would one day produce the extensive, impressive collection of photographs presented here—images unlike any I have ever seen. Somehow, she has gained access to instruments belonging to many of the most revered guitarists of all time. I am proud to say that she even included my own.”