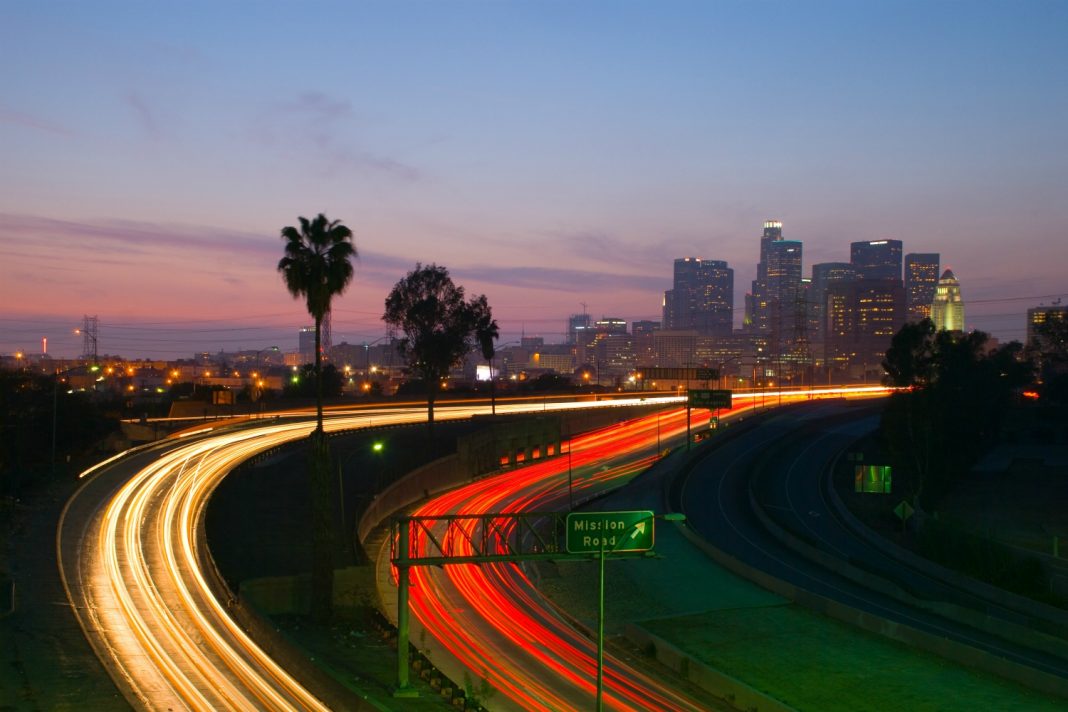 Sitting in traffic on the 101 is decidedly unfun, but music is a great antidote to road rage. From east of downtown L.A. through the Hollywood Hills, this musical map traces L.A.’s native music scene along the iconic 101 Freeway. Jam to hits from essential Angeleno artists like Herb Alpert and Joni Mitchell and discover rising stars like MILCK and Chicano Batman with this mix of electronic pop, classic folk, Chicano rock, and more. Just don’t get too distracted to use your turn signal when changing lanes.

L.A. icon Herb Alpert began his Grammy-winning career as an 8-year-old kid with a trumpet in Boyle Heights. Hit the gas up the eastside on-ramp to this mellow, brassy hit inspired by the 101.

After meeting at Garfield High School in East L.A., vocalist David Hidalgo and drummer Louie Perez started a garage band that snowballed into the iconic Eastside rock group Los Lobos. This 1987 cover of a 1959 Ritchie Valens cover of a Veracruz folk song kick-started the group’s career, blending their traditional Mexican folk roots with a Chicano-rock edge.

No drive through Eastside is complete without a throwback to L.A.’s most influential Chicano punk outfit, Los Illegals. While they never achieved national acclaim, Los Illegals were instrumental in building the L.A. punk rock scene, most notably at the now-defunct Mecca of ‘80s Chicano punk, the Vex.

“Freedom is Free” by Chicano Batman

From L.A. house band to Conan guest act, Chicano Batman catapults off eastside roots as easily and successfully as their name makes people smile. Vibe with this quartet’s funky blend of psychedelic pop and modern Latin rock before the 101 winds west to cross the river.

“One Wish” by Hiroshima

Just south of the downtown stretch of the 101, Little Tokyo blends historic Japanese culture with a thriving hipster music scene, from Tuesday Night Cafe’s bi-monthly open mics to the hip Blue Whale jazz lounge. With members from East L.A., Crenshaw, and Honolulu, veteran Angeleno-Japanese jazz fusion legends Hiroshima perfectly encapsulate what happens when L.A. musicians blend the past with the present. “One Wish” is their breakout hit—think Teebs meets Peter Gabriel, but with a Japanese twist.

Blast this heart-thumping feminist anthem by rising L.A. native MILCK as the 101 passes beneath Chinatown. Connie Lim created the stage name MILCK (her last name backwards followed by her first and middle initials) as a nod to her Chinese ancestry, but her music has inspired international acclaim—a video of her group performance at the 2017 Women’s March in DC went viral that January.

As you pass Angeleno Heights, you’ll also pass the Sanders House, the Victorian manor on Carroll Avenue featured in Michael Jackson’s iconic “Thriller” music video. (Although any reason to jam out to “Thriller” is reason enough, honestly.)

“As We Prey” by Bambu

Drive past Historic Filipinotown with your windows down low, soaking in the firebrand brilliance of Filipino-American rapper Bambu. This song is one of many that tackle the harsh realities of L.A.’s lopsided racial dynamics by tracing the personal and family history of the Watts-raised indie artist.

With traffic probably at a standstill, the stretch of the 101 that passes through Echo Park and Silver Lake is the best to delve into the discography of local natives…um, Local Natives. This track from the SoCal-born, Silver Lake-based indie rock band’s debut album encapsulates their dreamlike sound.

As the 101 winds past K-Town, branch out from K-pop with this soft, blurred tune by Korean electronic-pop artist CIFIKA. Singing in both Korean and English, CIFIKA blends her L.A.-based adolescence with her Korean roots.

“Aerials” by System of a Down

A drive through the section of East Hollywood known as Little Armenia demands the hard edges and distorted riffs of Glendale-native Armenian-American metal stars System of a Down. This song blends rock with faint Middle Eastern vibes and vocal harmonies that evoke the Gregorian chants from churches nestled just north of the freeway.

Cruise past Thai Town with this slow jam by mind-melting psychedelic Thai ensemble Khun Narin. While they’re not directly linked to the L.A. music scene, Khun Narin was discovered on YouTube by L.A. producer Josh Marcy in 2013.

“Ladies of the Canyon” by Joni Mitchell

What better way to accelerate into the Hollywood stretch of the 101 than with the lady of the canyon herself? From her bohemian Laurel Canyon abode to her Hollywood hangouts with Crosby, Stills, & Nash, the hills of the 101 are as Joni-ful (yep, this deserves to be a thing) as they are sun-soaked.

RELATED: A Love Letter to the 110 Freeway

Portrait of a Rock Star in Lockdown