Today, a metal gate secures the door of the 101 Coffee Shop on Franklin Avenue in the Hollywood Hills. Graffiti is scrawled across the windows and a lonely, dusty jukebox stands in the corner begging to play another classic rock tune. The restaurant’s closing was reported over New Year’s weekend, but it’s clear it’s been closed for months.

Warner Ebbink, who opened the 101 Coffee Shop in 2001, tells us that the Hollywood diner quietly closed back in March, right at the start of this devastating pandemic that continues to wreak havoc on small business—restaurants, in particular. The diner tried to adapt, but the menu didn’t translate into takeaway items. Ebbink and his restaurant group, Eat Heavy, which currently runs Little Dom’s in Los Feliz and Little Dom’s Seafood in Carpinteria, didn’t announce the March closing because of hopes that the pandemic was going to end sooner. They didn’t officially exit the their lease until right before the winter holidays, but the closing of the 101 Coffee Shop came and went without the notice it received this week.

“There’s so many places that are closed and I think so many people don’t really know what’s going on, and their lives are focused on trying to stay safe and healthy,” says Ebbink. “I think it’s one of those things that closed in plain sight, everybody drove by it every day and just thought, maybe one day it’ll reopen.”

As Ebbink points out, a restaurant’s closing can’t be equated with the disturbing number of L.A. residents who’ve died of COVID-19 (upward of 11,300 as of today) or, for that matter, a violent insurrection at the Capitol Building. Still, it’s an event that compounds the hurt plaguing the country. It also means lost jobs. In fact, two former 101 Coffee Shop employees were inspired to start a Go Fund Me campaign to support the restaurant’s displaced staff. 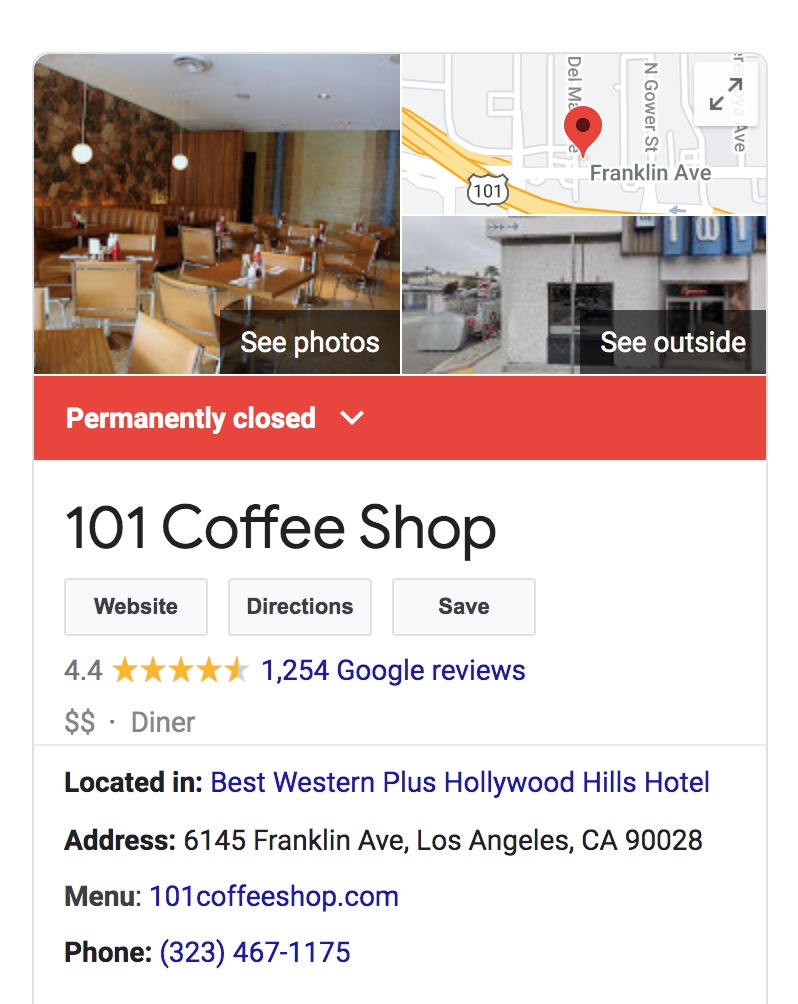 The shuttering of the diner quickly made the rounds on social media where some saddened customers reflected on romances both formed and broken off at the 101 as easily as others shared their favorite menu items. Of course, many posts referenced the ‘90s indie darling Swingers, which famously filmed in the coffee shop before it became a hotspot that attracted locals, tourists, cinephiles, and celebrities.

“We didn’t put it on the map; maybe we helped keep it on the map,” says Swingers line producer Nicole LaLoggia of the restaurant, then called the Hollywood Hills Coffee Shop. “It was populated back in the day, prior to the Swingers filming, by locals mostly, or true travelers jumping off the 101,” adds LaLoggia. “It was definitely a morning to mid-morning crowd, and then I think they closed early afternoon-ish.”

There’s no question that Swingers, and a mid-’90s renovation, breathed new life into the diner. Subsequent to Swingers‘ release, articles about the coffee shop almost always mentioned the film, and vice versa. A 1997 Westside Weekly piece explored Swingers tourism, where fans of the film flocked to L.A. to check out locations like the Dresden and the Derby. But the diner is a standout.

“I think that there’s something that is endlessly memorable about people finding their way in the world, late-night conversations at an independently run diner that’s open 24/7 where you can always get a bottomless cup of coffee,” says Swingers production manager Eden Wurmfeld.

“The organizing engine of Swingers was a coffee shop,” says director Doug Liman, who descended upon the diner with one lens and a noisy documentary film camera. The movie is bookended in a booth at the diner. In between, the coffee shop is the setting where Mike (played by Swingers writer Jon Favreau) and his friends debate the merits of Scorsese and Tarantino. It’s where Vince Vaughn jumps up on a table covered with pancakes while drunkenly yelling about being “growds up.”

“People could be flocking to the Los Feliz pitch and putt, but that’s not where the emotional center of the film was,” says Liman.

Swingers was actually named for the Beverly Boulevard coffee shop where Liman, LaLoggia, and others who worked on the film hung out; incidentally, Swingers has faced its own struggles during the pandemic, but was rescued from permanent closure by fans.

Prior to going out on his own, Ebbink managed Swingers for ten years and interacted with Favreau. “When he was pitching the movie, he came in and bought caps that said Swingers,” says Ebbink.

Though LaLoggia inquired about filming there, Liman assumed they wouldn’t be able to afford it on the film’s $189,000 budget. He also didn’t want to record to film what was perceived as a trendy location on one day only for it to be a thing of the past the next, which seemed typical of the L.A. zeitgeist. “I was like, ‘We should just pick some place that we don’t go to, that no one’s ever heard of,’” says Liman. “At least it might seem like, ‘Oh, you just haven’t heard of it yet.’” (Liman admits to underestimating the lasting popularity of Swingers.)

Enter the Hollywood Hills Coffee Shop, a no-frills diner and liquor store located on the ground floor of the Best Western hotel at Franklin Avenue and the 101 freeway, a restaurant Favreau was familiar with.

For the filmmakers, it was a blessing and a curse that the diner was about to close temporarily for renovations including the removal of the liquor store. It meant that the cast and crew could have the location for a reasonable fee and they could do whatever they wanted, but there was a catch. “We had from close-of-business till 7 a.m. the next morning to shoot everything that was going to be shot in that diner,” says Liman. There would be no opportunity for re-shoots if something went wrong, and a couple of things almost did. Liman’s camera assistant dropped the only lens they had. Appearing unscathed, Liman rolled the dice and continued shooting with it. Luckily the footage was fine. Also, the “baby” brought in for the film’s topsy-turvy final scene wasn’t a baby at all; it was a toddler, Liman tells us. To remedy the situation, Liman’s producer friend ran out onto Franklin Avenue to look for babies inside vehicles stopped at the traffic light, where a family agreed to lend their child for the scene.

There were spontaneous moments of magic, too. Liman picks out Vaughn standing on the table as something of which he’s especially proud. “Vince was apprehensive about it, and it was very moving for me when Vince sort of finally trusted me and the movie and let loose.”

In 2000, when Ebbink came in, he completely remodeled the location as an homage to the mid-century Googie diners for which L.A. is famous. Upon reopening, the restaurant no longer appeared as it did in Swingers, but more like it did in later episodes of Entourage and Gilmore Girls. In 2014, a manager at the 101 Coffee Shop told me that fans of the film often came in asking to sit in the booth from Swingers. His reply was always, “It’s no longer there.”

In the state of current affairs it’s hard for Liman to equate his emotions of the 101’s closing with Swingers. “I can’t really separate it from the pandemic. My emotion about it might be different if this were another year and they decided to build a condo or something,” says Liman, who just made the first high-profile pandemic-set film, Locked Down.

LaLoggia says she first heard of the diner’s closing last Sunday when she got a text from a friend. Her heart sank. “It’s always comforting when I’ve driven by it to know it’s there. There’s a little bit of a private, prideful smile that I find on my face, thinking, we did some good there. We had a good time there. We made people laugh and this place got a second life,” says LaLoggia. “It makes me sad that it’s not organically coming to its own natural end, that this is because of a fucking brutal pandemic.”

However, Ebbink says that rising costs were a factor, too. “COVID was the knockout punch; it wasn’t the main punch.” When the twenty-year lease on the space was coming to its end he hoped to negotiate a better rate, but it was clear at the beginning of the pandemic that the landlords were going to increase the rent. “Come June I probably would have closed the doors anyway,” says Ebbink.

Longtime landlords Mel and Bernie Adler could not be reached for comment.

RELATED: Marty and Elayne Celebrate 35 Years of Stayin’ Alive at the Dresden