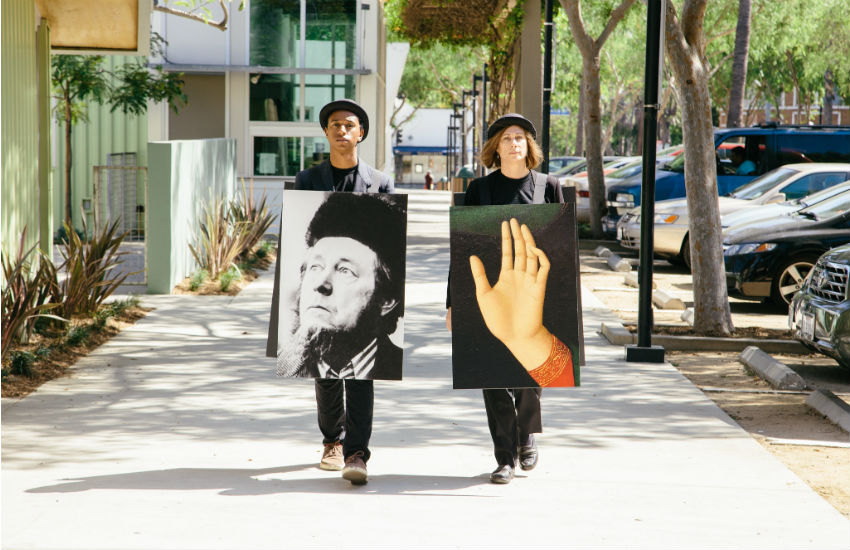 Last Saturday, on every major thoroughfare from Sunset Boulevard down to Beverly, and Doheny over to Fairfax, the sidewalks were littered with pictures on parade. Dozens of silent, suit-clad volunteers wearing decorated sandwich boards took to the streets. The boards were adorned with images ranging from the elemental and dissonant to pictures found in children’s books. The walkers offered pedestrians and drivers an opportunity to take in an image and contemplate its relationship with the environment at hand. No one was selling anything. No one paid admission. It was a purely aesthetic experience.

This public piece, entitled 100 Walkers, West Hollywood, is the work of Richard Kraft, a Los Angeles-based artist who was asked by the West Hollywood Arts and Cultural Affairs Committee to create a performance as part of their 30th anniversary of city-hood.

“It is amazing to see people’s reactions and to realize that, just for that moment, you are making an impact in people’s lives, even if it’s only to create confusion,” says William Wylie, a photography professor at the University of Virginia, who has participated in three versions of the walker project and flew out to L.A. be a part of the latest installment.

The “walker” project was founded by Richard Kraft and Joseph Biel back in April 2010. From there Kraft continued to experiment with a range of environments, from the deserts of Las Vegas to the college town of Charlottesville, Virginia, while incrementally increasing the number of participants.

Its lack of a clear purpose is the most refreshing part of 100 Walkers, West Hollywood. We are bombarded every day with the manipulative images of advertisements. Unlike corporations that tell us what they want us to hear, Kraft offers “the space for the viewer to think and feel whatever, or wherever, the work takes them.” He explains, “I want to bring aspects of the world, shrink them, and put them out there again so they can be looked at in a different way. I think that if you see an image of a missile in the newspaper it is quite different than seeing it on a person walking down the street.”

Kraft first got the idea as a boy growing up in London. His mother would take him shopping on Oxford Street and there was always a man there walking around wearing a sandwich board. That human billboard was Stanley Green, or the Protein Man, and his sign read “Less Lust From Less Protein,” followed by a list of protein sources that should be avoided. It wasn’t Stanley’s strange message that stuck with Kraft, it was the act itself. Kraft explains, “even at that young age I was aware that he was completely different from everything else that was on Oxford street. When I saw him there was something really reassuring about him. Somehow he reminded me that there was room in the world for incongruity and eccentricity. ”

Kraft was excited to get to share this project in this area, saying “West Hollywood is one of the most walkable parts of the city, which is why I chose to live here when I first moved to Los Angeles.” He is especially grateful to Andrew Campbell and the City of West Hollywood for making 100 Walkers a part of the 30th anniversary celebration, and for allowing him to fully implement the scope of the project. “My ambition has always been to do it with 100 people. I wanted it to be enough people that pedestrians and drivers and passers by would see many different walkers.”

“I had two guys in a convertible drive past and look at me while I was walking down Fountain,” says Wylie.

“I became aware that they were following along behind me and trying to figure out what was going on. The sign on my back said ‘Abandon Ship.’ Finally, when there was a moment to stop one of the guys jumped out of the car and ran up to say ‘We love it. We have seen a bunch of you already, but we can’t figure out what you are doing.’ So, in character, I handed him a card like I was supposed to, the cards are as nonsensical as the sandwich boards, and he just looked at the card and said, ‘Great, this explains everything,’ jumped back in his car and drove off.”

100 Walkers, West Hollywood was a one-day event held on Saturday, April 18, but there are many more events planned throughout 2015. For a full list of activities celebrating West Hollywood’s 30th Anniversary go here.