Home Uncategorized 10 Ways to Spend Your Weekend that Have Nothing to do with... 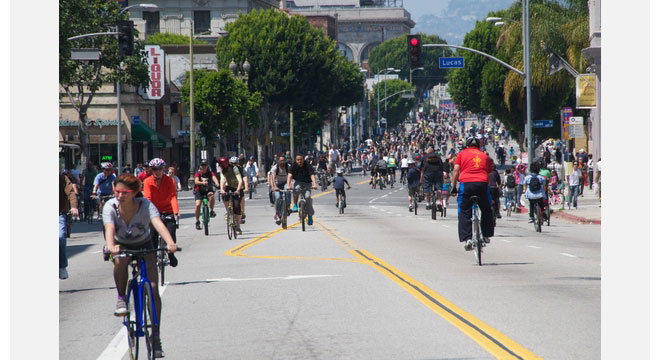 This weekend, the question isn’t “What’s going on?” It’s “What isn’t going on?” If you’re not going to a little thing called Coachella or celebrating National Record Store Day (it’s tomorrow, April 20), there are ample opportunities to while away your hours.

What if bicycles ruled the world? Don’t dream it; live it. Select L.A. streets are closed to cars for this iteration of the festival that envisions a car-free path to the sea. More information. (Sunday, April 21; Downtown L.A. to Venice)

It’s the cheesiest event around. Hundreds of amateurs chefs (and a few professional ones) compete to make the best sammies — whether savory or sweet, sloppy or delicate, basic or elaborate. There will also be cooking demos, costume contests, poetry contests, cheese calling contests, music, food, beer, and a performance by Richard Cheese. More information. (Saturday, April 20; Los Angeles Center Studios)

In the beginning was the word. Not long after that came this free two-day appreciation of it. Browse the tents of tomes or find a panel discussion that suits your taste, whether it’s dense maximalist prose or 30 Rock fan fiction. More information. (Saturday, April 20-Sunday, April 21; USC)

The horror film score tribute band might just be the only one of its kind, paying homage to the music backing films like Return of the Living Dead and Phantasm. Stick around after the show for a screening of Lucio Fulci’s 1980 gore fest The Gates of Hell. More information (Saturday, April 20; Cinefamily)

As part of the New York Dolls, Thunders dished out the snarls and sneers that became the hallmark of punk rock. This show pays tribute to the bombastic singer and guitarist, with performances by protopunker Joey Pinter and new-school acts like the Telephone Lovers. More information. (Saturday, April 20; Los Globos)

After strolling through the seasonal orange flora carpeting the high desert, poppy peepers can enjoy live music, a farmers’ market, and food. But will there be poppy seed bagels? More information. (Saturday, April 20; Lancaster City Park)

Maybe you’ve sung along to “Living On A Prayer” in your favorite dive bar and now you want to see the man behind the karaoke staple. The most enduring rocker of the 1980s hasn’t slowed down. And he’s got a new album, What About Now, to keep him busy. More information. (Friday, April 19; Staples Center)