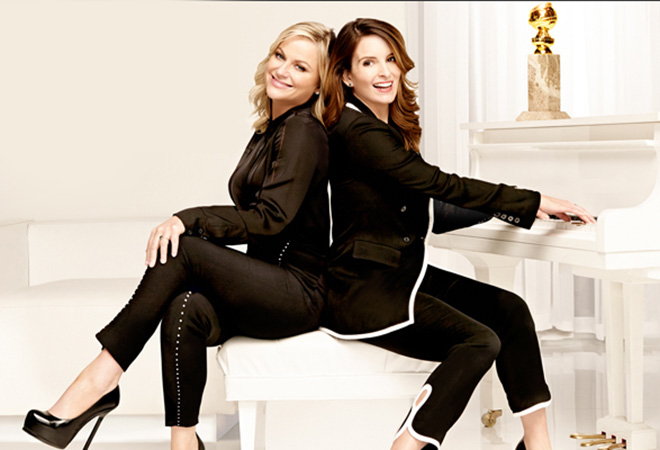 Last year, we tried to decide which of the two Golden Globes hosts would outshine each other? It was a bad idea. Sisterhood is powerful and comedy, even more so. Together, Amy Poehler and Tina Fey were a formidable duo. More than that, they were the best hosts of any awards show we’ve seen in years. They return on Sunday for a repeat stint at hosting the Golden Globes (5p.m. on NBC). Here are a few things we’d like to see them do.

10. Please, please, please give the creators of Lost some ribbing. Off the top of our heads how about… ” Soooo, guys… after Breaking Bad’s stellar finale, do you feel kinda like jerks for going the ‘We have no idea how to end the show so let’s write a super-confusing finale that provides few answers and offers little payoff for longtime fans’ route? Just wondering.”

9. By this point, Miley Cyrus is almost a parody of herself so there’s no need to spoof her twerking, tongue-wagging, or wrecking ball-riding. But the pearl-clutching that she inspires is ripe for satire.

8. First, Jackie Chan decided to turn his life story into a musical. Then, the hills came alive with the sound of Carrie Underwood. Now, Tupac’s songs will be featured in a Broadway show. Let’s mix and match these DNA strands for some real fun. How about Carrie Underwood starring in the live TV musical Speidi: Turn Off the Dark? Or Jackie Chan playing Tupac in a theatrical adaptation of Poetic Justice? Or a hologram of Tupac playing and avenging Jedi in Star Wars: Episode XIV – Revenge of the Ewoks

7. The hairpieces in American Hustle were so over-the-top they were as memorable as the characters. Poehler could rock Bradley Cooper’s tight perm while Fey might opt for Amy Adams’s long, feathered waves. For the sake of authenticity, neither host could wear a bra. Alternately: We’d love to see Poehler and Fey make an entrance while wearing muumuus and manically cleaning the stage to the strains of “Live And Let Die.”

6. After his stint as host of last year’s Oscars, one of the most thankless gigs in all of Hollywood, Seth MacFarlane was accused of sexism, racism, and general unfunnyness. (On the upside, we’re impressed by his singing voice.) MacFarlane is overripe for a sendup. Who spoofs the spoofer?  These ladies, that’s who.

5. Mass murder as a crucial plot point in an already violent fantasy show? Horrifying but perfectly logical. An abrupt accidental death in a generally placid costume drama? “Shock value for its own sake or maybe an actor’s unresolved contract dispute.” How about some kind of skit that combines Downton Abbey with the Red Wedding from Game of Thrones? Throw in a little Hunger Games (maybe the nominees have to fight each other for statuettes) and you’d have a surprising awards show twist.

4. What’s better than Downton Abbey? Patton Oswalt’s live-Tweeting of Downton Abbey. Plant the comedian in the front row, pay him to live-Tweet the Golden Globes, and have Poehler and Fey read his best missives during the telecast.

3. Since it’s our tax dollars funding the NSA’s massive and probably unconstitutional program of Big Brother-like snooping, we should be able to rely on the government agency for day-to-day help. Accidentally deleted a voicemail? Call the NSA. Can’t remember a password? Call the NSA. Need a funny joke for the Golden Globes’ opening monologue? Call the NSA. Maybe Fey and Poehler can flash a version of their heavily redacted original monologue, prior to its approval by security watchdogs.

2. One of the best gags at any awards show last year was the shot of Lena Dunham sitting naked on a toilet eating cake. Sure, it happened during the cold open of the Emmys but why not riff on the Girls’ creator’s hilarious moment?

1. Every award show gets the drinking game it deserves, whether it’s the Kids’ Choice Awards (do a shot a of chocolate milk every time someone makes a booger joke) or the AVN Awards (don’t ask). You can invent one on the fly or follow one created by a mainstream media publication, but in the year 2013 the drinking game is an essential feature of TV awards shows. How meta would it be for Poehler and Fey to play one of them while they’re onstage. And that’s how the internet implodes on itself.