Home Animals 10 Things We Learned About the Hello Kitty Exhibition from the PhD... 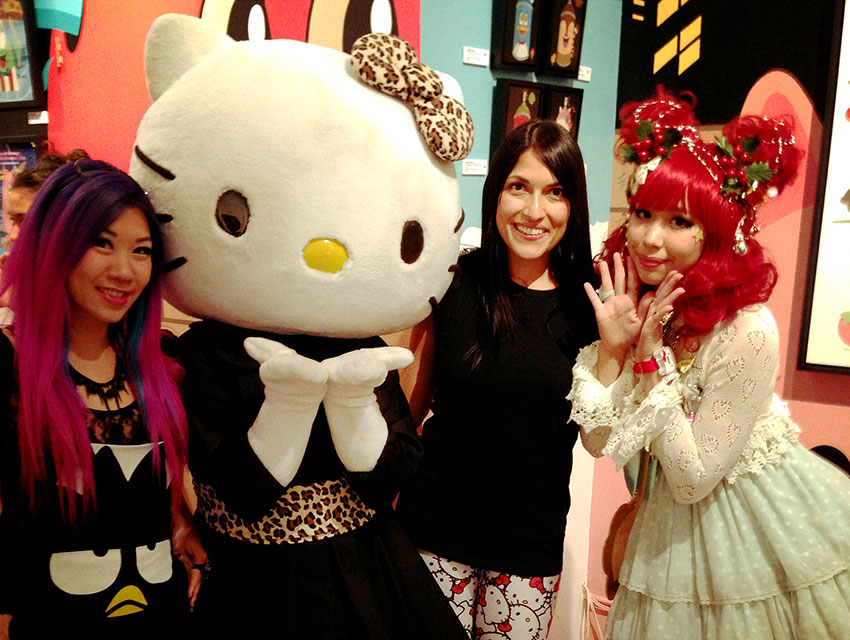 Back in August Hello Kitty made the news when it came to light that she wasn’t a cat, but a little girl. The revelations were courtesy of Dr. Christine R. Yano, who learned this fun “fact” from Sanrio execs while she was researching the character.

Yano, an esteemed anthropologist from the University of Hawaii and a visiting professor at Harvard, has spent years studying Hello Kitty. She literally wrote the book on the character: Pink Globalization: Hello Kitty and Its Trek Across the Pacific. This Saturday, the Hello Kitty museum retrospective she organized will open at the Japanese National American Museum in downtown.

Hello! Exploring the Supercute World of Hello Kitty digs into the history and pop culture influence of Hello Kitty’s. The exhibition will feature items from the Sanrio archive, some of which have never been seen by the public, along with art inspired by or dedicated to Hello Kitty. The first museum retrospective dedicated to the character, it will run through April 26, 2015.

Yano has been busy preparing for the exhibition opening but we managed to catch up with her to talk about her reason for studying Hello Kitty, her reaction to the Hello Kitty reveal and her future plans.

1. Yano has been studying Hello Kitty for 16 years
“I was doing a project on Japanese cross culture, so I included Hello Kitty. That was 1998. I told my secretary what I’d done and I was kind of laughing. What I didn’t know was that she is actually a fan, a middle-aged Japanese-American woman in Hawaii. I was really surprised.”

2. She’s not a super fan
“There are fans and there are detractors. As an anthropologist, my goal is to get this field of interpretation, get these sets of meanings, and see how it works in the population. What does she mean? For whom and for what kind of purposes?”

3. Hello Kitty’s blank look has a purpose
“Sanrio does this for all its characters, but Hello Kitty is their flagship. The extreme simplicity with abstraction can go in so many different places. Hello Kitty can have a punk look, it can have an angelic look; it makes for a kind of design flexibility.”

4. Hello Kitty is a symbol for many Asian American women
“In the mid to late-1970s, there wasn’t that much that was specifically from Asia. I considered Hello Kitty to be one of the first. It really meant a lot to the Asian American community, and they took ownership of the character like it was theirs. I think that was really significant as far as cultivating an identity that was separate from white America.”

5. Her kids prefer the other Sanrio characters
“I think my own kids prefer Keroppi or Badtz Maru, I forget which one. Anyway, some other characters.”

7. She wasn’t surprised that Hello Kitty is not a cat
“This is not something new from Sanrio’s point of view. It’s been on the website for decades. But when I was writing up the panels for the exhibition, I referred to Hello Kitty as a feline. Sanrio provided a correction because they really did want to emphasize the little girl-ness of the character rather than the possible cat-ness.”

8. She was more surprised at the general public’s reaction
“I had no idea. I think what really caught the public’s imagination was the headline which was ‘Hello Kitty is not a cat.’”

9. She expects fans will adore the exhibition
“The fans will go crazy. They’ve just never seen Hello Kitty in these kinds of ways. It’s two floors. It’s a big exhibition.”

10. The show might head to other cities
“It’s being designed for LA, because that’s where it’s being opened but they’re trying to make this a traveling exhibition that will go for three to five years. That’s a little ways off. But still, the idea that all these items, all these stories, all the panels that I wrote will be travelling, it’s kind of mind boggling.”

There’s a Hello Kitty Food Truck Coming To Torrance This Saturday and L.A. Is Trembling with Excitement

13 Stellar Things To Do This Weekend