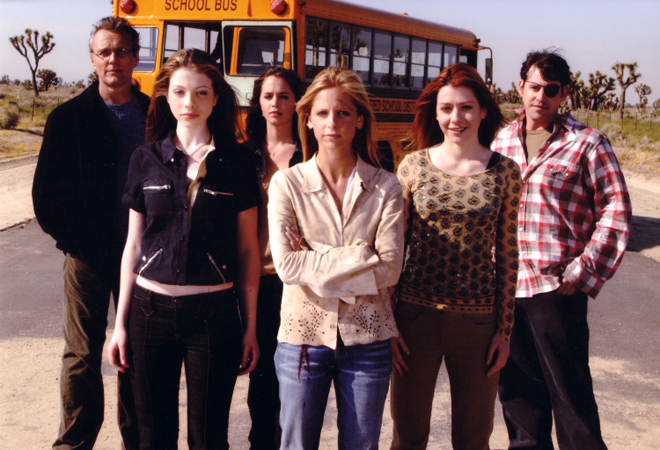 Ten years ago yesterday, the UPN network (remember them?) aired the series finale of Joss Whedon’s cult masterpiece, Buffy the Vampire Slayer. What started as a mid-season replacement in March 1997 became a critical and popular success that put the fledging WB network (now known as the CW) on the map. With Sarah Michelle Gellar as the titular ass-kicking heroine, the show ran for seven seasons (though it switched networks after the fifth) airing its series finale on Tuesday, May 20, 2003. The snappy writing and supernatural milieu (which foretold the current mania for all things vampiric) made it a fan favorite. Whedon’s flair for blending highbrow aspirations with a pop culture sensibility made it a classic.

Here are 10 reasons why Buffy the Vampire Slayer still slays:

1. It Exposes the True Horror: High School
When your superhero is a teenager, the monsters that Buffy and her friends face serve as perfect metaphors for high school’s challenges: the witchy cheerleader, the bratty pack mentality of cliques, the school cafeteria. Everyone is haunted by demons; with Buffy it’s literal. After they sleep together, her boyfriend turns into the biggest demon of all. And it’s not because he doesn’t call her back.

2. It Paved the Way for Twilight
Long before Bella met Edward, Buffy met Angel (David Boreanaz). And then Spike (James Marsters). The brooding, misunderstood Angel was a raging lunatic long before Edward claimed to be one, and without the Mormon abstinence undertones. Without the groundwork that the Buffyverse had laid, it’s possible The Twilight Saga wouldn’t have been the huge success that it is.

3. It Kicks Ass
Before Scarlett Johansson became Black Widow, Whedon, who also wrote and directed last summer’s blockbuster The Avengers, set out to revamp the horror movie trope of the “Final Girl.” He turned cliché on its ear, transforming a victimized archetype into a heroine. Buffy didn’t merely have to protect herself, she had to save the world. A lot.

4. It’s All About Friends
As adept as Buffy Summers was at fighting baddies and slaying vamps, she wouldn’t have survived as long as she did without her circle of friends, affectionately referred to as the Scooby Gang. The core group of Willow (Alyson Hannigan), Xander (Nicholas Brendon), and Giles (Anthony Stewart Head), help her conduct research, pull off elaborate plans, and practice magic. She wouldn’t even have survived the first season without Xander there to bring her back.

5. It Has Season-Long Story Arcs
This is all pretty common today, with complicated series like Mad Men and Game of Thrones, but in 1997 when Buffy first aired, it was a rare phenomenon. Even shows with complicated mythologies, like Star Trek, featured stories that were usually resolved by the end of the episode. Buffy’s complicated plots stretched across numerous episodes and featured a primary villain (or set of villains) for the whole season. It was odd when an episode ended with the words “To Be Continued” because really, every episode was to be continued.

6. It’s Packed with Pop Culture References and Classic Lines
Buffy the Vampire Slayer is known for fast-paced dialogue and eminently quotable lines like “You need a personality, stat.” Easily adding prefixes, like über (as in “it’s the übersuck”), and suffixes like –y (“fortressy and demony”) or –age (“the glamorous world of vampire slayage”) to common words, Whedon created a new dialect of “Slayer Slang” that fans latched on to. The show not only played with existing pop culture references, it added many of its own to the current lexicon.

7. It Has a Memory and a History
Whether it’s easily remembered plot points, like previous demons who have been vanquished, or subtle hints at character, like the music played to commemorate a fallen loved one, the show remembers its own past. Its characters grow, develop, and change, but the show refers to past events, encouraging viewers to remember it along with the players.

8. It’s Not Afraid to Love Musical Theatre
Whedon never grew complacent. When he felt he was relying too much on dialogue, he would write an episode that takes place largely in silence (see “Hush” or “The Body”). A fan of musical theatre, Whedon challenged himself to write a complicated, full book musical in the space of an episode (the brilliant “Once More, With Feeling”). He also encouraged his viewers to understand and appreciate musicals through that season six episode, and through his later work, the Internet super-villain musical, Dr. Horrible’s Sing-Along Blog.

9. It Takes Huge Risks
Whedon didn’t kill off anyone as major as Ned Stark in Game of Thrones, but he prematurely knocked off Jenny Calendar (Robia LaMorte) just when she was becoming an important member of the Scoobies. He also took Buffy’s mom prematurely — and by a regular aneurism not some nasty demon or magical potion, forcing Buffy (and us all) to face a shocking reality. He continued to do similar things in his later works, bringing beloved characters to horrible, untimely ends.

10. It Embraces the Geek Lifestyle
Buffy was the popular cheerleader in her old school in Los Angeles, before she blew it up (in the 1992 film of the same name). When she moves to fictional Sunnydale, California, where the series takes place, she’s an outcast, shunned by homecoming queen Cordelia (Charisma Carpenter). She becomes friends with geeky Xander, mousy Willow, and über-intelligent British librarian Giles. Even Cordelia eventually becomes one of the Scoobies and faces the same ridicule that she once dished out. Whedon is a self-professed geek and based much of Buffy on his own high school experience. That humility, isolation, sensitivity, and passion is reflected in all of his works: Buffy, its spin-off Angel, the short-lived Firefly, Dr. Horrible, and now The Avengers.

As a bonus, here are some of our favorite episodes from the show’s seven-season history:

“The Wish” (S3, E9): Sunnydale sees an alternate reality where the Slayer never came to town

“Doppelgangland” (S3, E16): Evil Willow from the alternate universe of “The Wish” gets caught in the Scoobies’ reality

“The Body” (S5, E16): The Scoobies try to recover after the death of Buffy’s mom

“Once More, With Feeling” (S6, E7): A musical demon makes the town sing and dance their deepest feelings

“Tabula Rasa” (S6, E8): The one after the musical, where a memory spell goes wrong