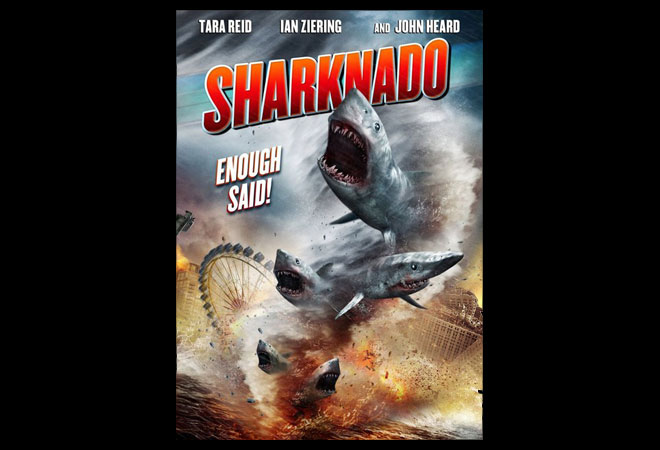 The Lone Ranger flopped. So did After Earth and White House Down. But the summer’s unqualified movie hit—if you measure by social media buzz—is Sharknado. As soon as the goofy action flick starring Ian Ziering, Tara Reid, and a tornado full of sharks heading for L.A. began airing last night on Syfy, it became an instant success. Twitter blew up with celebs riffing on the film though the best comment came from Ziering (@IanZiering) who tweeted (while getting ready for a Chippendale’s show in Las Vegas):

when I read this scipt I thought, chainsawing out of a shark, repelling, guns, sharks, tornadoes, I’ve gotta do this

Sharknado aint high art but it delivers what it promises: a tornado of sharks. What other reason could you need?

10. Because Piranhurricane was a flop and Tsunamisaurus Rex doesn’t come out until October.

9. Because Mia Farrow did it first. Though not with Philip Roth.

8. Because seven years later we’re still trying to fill that Snakes On A Plane-sized hole in our hearts.

7. Because it has a killer ending.

6. Because it’s nice to see that Tara Reid has moved past the grotesque-plastic-surgery-and-drunken-nipple-slips phase of her career.

5. Because hell hath no fury like a Carcharodon scorned.

2. Because we love a good portmanteau.

1. Because it’s like watching Jaws on LSD, meth, cocaine, weed, ecstasy, cold-brewed coffee, Red Bull, and Pixy Stix all at the same time.