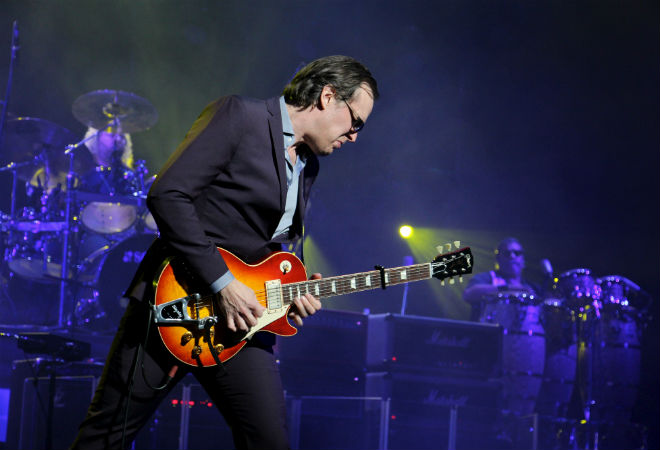 Joe Bonamassa may be the greatest guitarist you’ve never heard of—and he’s fine with that. A nontraditional blues rock guitarist, Bonamassa has recorded nearly 30 studio, live, and collaborative albums. He opened for B.B. King at age 12, sold out the Royal Albert Hall in 2009, and has shared the stage with his hero, Eric Clapton. Yet he often goes unrecognized even at meet-and-greets with his own fans. His dry, self-deprecating sense of humor embraces the joke; bumper stickers reading “Bona-who?” sit at his merch table. “Some people take it as very literal or as ego,” he says. “But to know me is to know the crappy jokes. Those come free every concert.” Even if his recent Grammy nomination for his collaboration with Beth Hart were to change all that, Bonamassa would rather be at home watching Storage Wars than walking a red carpet. He does what he does for one reason: He’s hopelessly in love with the guitar.

We spent a few minutes with Bonamassa before he headlined the Dolby Theatre on Friday night and accepted an RIAA platinum disc for his Live at the Royal Albert Hall DVD. The fact that he played the site of the Academy Awards is perfect irony for the Los Angeles resident who calls himself a “guitar geek done good in a town based on celebrity.”

First, a Grammy nomination. Then, an RIAA platinum disc. What’s going through your head?
We’ve only done sixteen albums, eight or nine DVDs. Honestly, I’m happier for Beth Hart. She’s so criminally underrated. I’m a maverick. I lurk in the shadows of the music business. We promote our own shows. We don’t have a booking agent. We have our own record company. We do our own tours. The most traditional music industry thing we have is Michael Jensen and his publicity firm. And our distribution company. So, I’m more happy for Beth Hart. We probably won’t win but the fact enough people got behind the record is cool.

How do you define your sound?
It’s a combination of every influence I’ve ever had from classic rock to blues to acoustic music to Americana, British blues, and heavy metal. People who buy my albums know that anything could show up: a country tune, something that’s heavy rock, or a 12-bar Chicago shuffle with horns. Somehow, it all glues together. You have to call it something. It’s blues-ish but it’s not blues in the traditional sense. It’s not even close.

When you shared a sold-out Royal Albert Hall show with Eric Clapton, did you feel like you’d arrived? Do you ever feel like you’ve arrived?
I identify [more with British blues]. I can walk down any street at any point in time, anywhere, and no one will recognize me. I even show up to my own meet-and-greets and I’m shaking someone’s hand and they say, “When’s Joe going to come out?” I think I’m well known by a certain genre of people. I have no interest in hit songs. I have no interest in videos. I have no interest in award shows. Anything having to do with things that are fickle. I’ve spent 25 years building a foundation based on hard work. This year we did 99 shows in 237 days across the globe. Played a 6,000-seat venue in Moscow, sold it out. We did arenas in Europe. We have Red Rocks booked for next year. People go, “Who is that guy?” I like.

After so many albums, live DVDs, and collaborations, you remain best known to a certain subset of music fans. Do you prefer it that way?
We’re the QVC of music. We use Eric Clapton as the high watermark. If you go see Eric Clapton, you’re going to hear blues. You’re going to hear the hits. Some people are there just to hear “Wonderful Tonight,” “Cocaine,” and “Layla.” Most of the Clapton show, though, is blues. [My business partner] Roy and I looked at each other and said, “There’s 15,000 people here. There’s gotta be 15,000 people in this market who are willing to come out on a Tuesday night and pay to see blues rock. We have to find those people.” I’m not trying to find 13-year-old Justin Bieber fans.

Do you think the younger generation and the modern rock world have lost their connection to the roots?
Not with the Black Keys, Jack White, the White Stripes. There are some other cats too. I think the music those guys are making is incredible; quite frankly, it’s more traditional blues than I’m doing. The fact that they found an arena audience really gives me hope because rock kids, they’re lovin’ it. The thing I try to encourage is that if you can play, play. Listen to Nat King Cole records. Listen to Ray Charles records. Listen to how pitch perfect they were. The horns, the background singers—they were cutting direct to disc. I sound like a grumpy old man because I basically am. Myself included, there’s not a generation of musicians that could stay up with those guys and those ladies like Ella Fitzgerald. It’s dangerous how much help musicians get now.

Growing up, you played with people like B.B. King. What values did you learn at that age?
B.B. always used to say, “Keep doing what you’re doing. Watch your money.” B.B.’s a businessman and a survivor. If you believe in it long enough, it’ll gain traction. It may not be in the time frame you wanted, which was my case, but better late than never. We kept putting out record after record after record and no one would listen. All of a sudden, you get a few nudges in the right direction. Basically, that concert—the platinum disc sitting over there—was the precipice of all those nudges.

Would you consider that your watershed moment?
Absolutely. That was the make-or-break moment. If that thing came out average or was an epic fail, we wouldn’t be having this conversation. But when it happened, it became a baseline. Then you go, “Okay, this got interesting.” Then the real work started.

At this point in your career, what musical horizons do you still want to reach?
I don’t think I have a definitive sound yet. I think it’s an amalgamated sound of different people. I don’t have a “Layla.” I have some songs people would be disappointed if I didn’t play but nothing earth shattering. I’ve got to get off my high horse and start writing.

If fans are meeting you for the first time, what do you want them to know?
I’m happy when people come up to me but—I know it’s odd to say in a town based on the whole TMZ spectacle—I don’t really like having my picture taken. I love the guitar. I’m blessed to be able to make a living playing the guitar. I’m happy to talk to folks on the street about playing the guitar. I’m not the guy who walks into the room hoping to be noticed.

Will we see sneaking in the back door of the Grammys to avoid the red carpet?
I’m not going. Beth is going to go. I want to be home watching Storage Wars. I’m a guitar geek done good in a town based on celebrity. All this is really just an excuse to go around the country and collect guitars.