Home Uncategorized 10 Non-Easter Things to Do on Easter Weekend 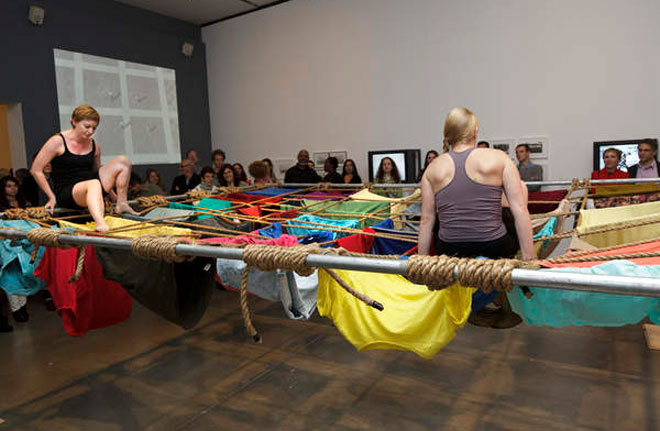 Photo courtesy of the Hammer Museum

It’s Easter weekend. Aside from waiting at the waffle station at another expensive buffet brunch or raiding the discounted Easter bunnies at your local drugstore on Sunday afternoon, here are a few activities that don’t involve a giant imaginary rabbit.

SEE: Trisha Brown: Floor of the Forest
Two dancers from the UCLA World Arts and Cultures program balance precariously on a web of ropes stretched across a sculptural steel frame in this recurring performance. (Saturday, March 30-Sunday, April 21; Hammer Courtyard)

DRINK: March Madness
The game is on at STREET, where Susan Feniger and Co. are cheering on the NCAA with a drinking game and drink specials. Cheer (or groan) for your favorite team at the bar, while a grid determines the day’s drink specials using each game’s final score. The discounts ($1 to $8, depending on the match) apply to regularly priced beer, elderflower sangria, and cocktails such as tequila tamarindo. (Through Saturday, March 30; STREET)

LISTEN: Living Colour
The 1980s return (specifically the year 1988) when the funk-rockers return to celebrate the 25th anniversary of their first release, Vivid. You probably know it best from the hit “Cult of Personality,” but there are 10 other tracks on the album, which slices and dices jazz, rap, metal, and plenty of other genres. (Saturday, March 30; El Rey Theatre)

LOOK: A Confederacy of Heretics
In 1979, architect Thom Mayne’s pop-up exhibition in Venice at the Architecture Gallery was the place to see photos and plans of visionary structures. Revisit the ten-week show that highlighted the early works of Eric Owen Moss, Frank Gehry, and Frank Dimster. (Friday, March 29-Sunday, July 7; SCI-Arc)