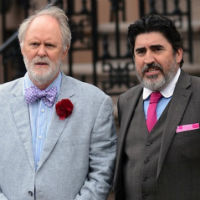 The Los Angeles Film Festival kicks off tonight with the North American premiere of Snowpiercer. It’s a spectacularly weird science-fiction epic about class struggles on a high-tech train in a post-apocalyptic landscape. Korean director Joon-ho Bong is behind the lens while Chris Evans, Tilda Swinton, John Hurt, and Octavia Spencer round out the cast. The following day, the festival will feature a documentary about the fall of Saigon, a gay love story starring Alfred Molina and John Lithgow, and a biopic about Jimi Hendrix. That’s just a sample of what’s on offer at one of the most diverse film festivals around.

More than most festivals, the LAFF features a wonderfully diverse lineup. The nine-day confab screens movies from all genres and countries with independent and art house movies given equal billing alongside blockbusters like How to Train Your Dragon 2. It’s also one of the few notable festivals willing to devote time to music videos. Run by Film Independent, the event also features plenty of great panel discussions with contemporary artists.

This year, LAFF is highlighting Los Angeles itself with a new category, LA Muse. The idea is to showcase films in which the city factors heavily into the milieu. Throughout the history of cinema, L.A. has shown up as a backdrop in all sorts of productions, sometimes in colorful and obvious ways, sometimes anonymously. Thom Andersen’s wonderful 2003 essay film Los Angeles Plays Itself explores the myriad ways movies have used our city over the decades. This year’s iteration of the fest is likely to add a few more examples to the canon.

Here are five of the most intriguing movies playing in the LA Muse section.

Eat With Me
Directed by David Au
A woman moves in with her gay son who runs a failing Chinese restaurant in downtown. Mention Chinatown the neighborhood and people will likely think of Chinatown the movie, but there has long been a vibrant community in that area. This film takes a slice-of-life approach to the underexposed neighborhood.

Echo Park
Directed by Amanda Marsalis
Here’s another story about a woman making a move, this one from swanky Beverly Hills to the funkier auspices of Echo Park. Many recent movies set in L.A. have used Silver Lake as a backdrop, but Echo Park, which is right next door, has gone relatively overlooked. This film takes advantage of the scenic possibilities afforded by the gorgeous and recently reopened Echo Park Lake.

Los Angeles
Directed by Damian John Harper
L.A. has been a magnet for immigrants for as long as it has existed, and this isn’t the first movie to explore how the city faces modern immigration concerns (think the Oscar-nominated A Better Life). This film follows a Mexican youth who courts disaster when he partners with gang members on the other side of the border to secure his safe crossing. It’s tricky to tangle with such charged topics; hopefully this movie can pull it off.

Nightingale
Directed by Elliott Lester
David Oyelowo drives this one-man show as a veteran who comes apart at the seams over the course of one evening. Oyelowo’s star is rising steadily but surely. He turned in a bravura performance in last year’s The Butler and is playing Martin Luther King Jr. in the upcoming biopic Selma. Here is the perfect showcase for an actor to watch.

Trouble Dolls
Directed by Jennifer Prediger and Jess Weixler
Two struggling conceptual artists get kicked out of their New York apartment and decide to struggle in L.A., where they decide to try out for a reality show as a piece of performance art. Directors and writers Jennifer Prediger and Jess Weixler play the main roles, mixing real-life friendship, affection, and experiences into their offbeat fiction. It wouldn’t be a lineup of L.A. movies without something about showbiz, right?

And here are five other buzzworthy films at the festival.

Love is Strange
Directed by Ira Sachs
Alfred Molina and John Lithgow play longtime companions who decide to finally tie the knot when circumstances force them to live separately. It’s like a modern, gay version of Make Way for Tomorrow. The film has received nearly universal praise at Sundance, Berlin, and Tribeca, making it one of this year’s festival heavyweights.

Frank
Directed by Lenny Abramson
A man named Frank who is never seen without an oversized fake head (played by Michael Fassbender!) fronts a dadaist rock band. He leads his merry group on all manner of strange adventures in a film that seems like a cult sensation in the making. Based on the real antics of English musician/comedian Chris Sievey, this may be the indie comedy to beat in 2014. Despite the film’s strange premise, few viewers have had anything bad to say about it.

The Overnighters
Directed by Jesse Moss
When an oil boom in a North Dakota town attracts unsavory characters looking for work, the only one to accept them is a local Lutheran minister. This documentary won a Special Jury Prize at Sundance, along with raves about its intense subject matter. The story took turns no one, not even the filmmakers, anticipated.

The Two Faces of January
Directed by Hossein Amini
Based on the book by famed crime novelist Patricia Highsmith, this slow-burn psychological thriller set in Greece in the 1960s follows the dark machinations set in motion by the collision of a vacationing American couple (Viggo Mortensen and Kirsten Dunst) and an enigmatic tour guide (Oscar Isaac). Director Hossein Amini made his bones writing films like Drive, so he could be a great match for the vicious sensibilities of Highsmith, who wrote such works as The Talented Mr. Ripley and Strangers on a Train.

Dear White People
Directed by Justin Simien
The underdog feature that was financed via a crowdfunding campaign has skyrocketed since its Sundance premiere. The movie, which is all about “being a black face in a white place,” follows black Ivy League university students who have to navigate the usual interpersonal struggles as well as the everyday frustrations of dealing with clueless white classmates. A biting and completely uninhibited satire about race relations, this film might make you flinch as much as it makes you laugh.