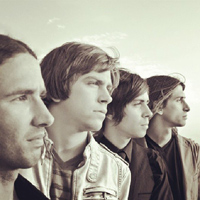 Angel Olsen
The Missouri-born singer’s simple chords and powerful yet intimate vocals tell you it’s ok to be lonely. Who needs more than thoughtful songs combined with grunge guitar? Her latest album Burn Your Fire For No Witness is out now on Jagjaguwar.

Jamestown Revival
Jamestown Revival is essentially Jonathan Clay and Zach Chance, two guys from a little town called Magnolia, Texas who have been singing together since they were kids. They have a fresh take on classic twang and their harmonies are as tight as any Everly Brothers recording.

No
This L.A.-based rock band draws comparisons to The National thanks to the deep baritone of Bradley Hanan Carter and lyrics like “We make some noise inside a room and call it art” on their dramatic new single “Leave the Door Wide Open.”

The Preatures
Hailing from Sydney, Australia the band’s latest album Is This How You Feel? is out now on Harvest Records. Isabella Manfredi and Gideon Benson trade off vocal duties over a beat of rhythm-focused ’70s pop.

Jetta
As a backup singer Jetta has been on the road with Paloma Faith and Cee Lo Green. Now, we get to hear her commanding voice as she steps forward to perform her own songs. “Feels Like Coming Home” is the powerful single on her debut EP Start A Riot, out now on Universal Republic Records.

Cloud Nothings
The first single from their next album (due in April), “I’m Not Part of Me” strikes a balance between noisy pop punk and hummable hooks.

Nikki Lane
The country singer’s sophomore album (out May 6), produced by Dan Auerbach of The Black Keys, is an eagerly anticipated way for the sweet and sour singer to croon that it’s “always the right time to do the wrong thing.”

Future Islands
There’s been a lot of buzz for the combo of cool synth pop and Samuel T. Herring’s dramatic vocals. Along with a Coachella appearance and a number of sold out headlining dates, the band played The Late Show and will release its new album Singles on March 25.

The Autumn Defense
Since 1999, this has been a side-project for John Stirratt, the bass player in Wilco and Uncle Tupelo, as he collaborates with multi-instrumentalist Pat Sansone on ’60s rock and pop. Their fifth LP, cleverly called Fifth, was released this past January on Yep Roc.

Speedy Ortiz
This Massachusetts band, led by Sadie Dupuis, brings ‘90s-style lo-fi guitar and Liz Phair-esque vocals in to the 21st century. The quartet is preparing for the release of a full-length album this year.

Just because we love the name: Potty Mouth

And a few Los Angeles-based acts we’d like to get to: Avi Buffalo, The Blank Tapes, Eleni Mandell, Kelela, Dum Dum Girls, Holly Conlan, Banks, and Fever the Ghost.

Jamestown Revival Isn’t Quite Ready to Put Down Roots