Home Uncategorized 10 Fictional Couples Who Can Finally Get Married 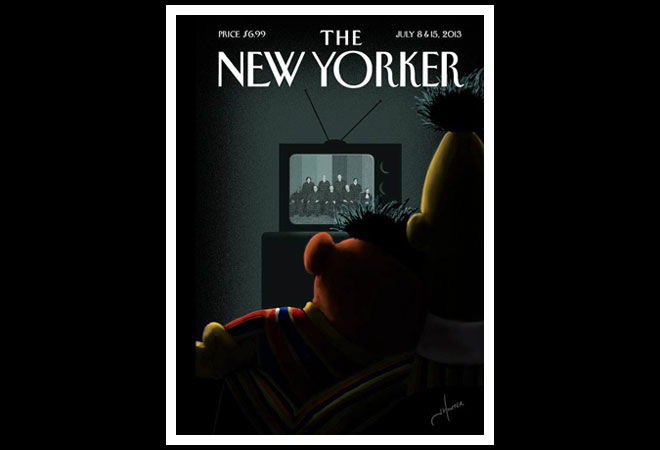 Inspired by the New Yorker cover featuring Sesame Street’s Bert and Ernie snuggling as they learn of the Supreme Court’s decisions legalizing same sex marriage, here are 10 other couples who can finally throw off the shackles of subtext and get hitched.

Batman & Robin
The Batman oeuvre is shot through with homoeroticism. Nowhere is it more campy or over-the-top than in the 1960s TV series starring Adam West as the caped crusader and Burt Ward as his boytoy Robin—cough, cough, we mean boy wonder.

Peppermint Patty & Marcie
It doesn’t seem like a terribly equitable relationship, but if your partner is cool with referring to you as “Sir,” who are we to judge?

Balki & Cousin Larry
Before they were Perfect Strangers, they were perfect strangers. After living together in the same Chicago apartment for eight seasons, hyperactive Myposian expat Balki and discount store clerk Larry could easily become kissing cousins. They be so happy, they do the dance of joy!

Smithers & Burns
The Simpsons probably has more openly gay characters than any other animated show (admittedly not a high bar). The show’s most prominent homosexual is also its most frustrated. Perhaps now Waylon Smithers can stop chanelling his unrequited affection for his boss, Montgomery Burns, into musicals about the Malibu Stacy doll and give the love that dare not speak its name a voice. It’s about time.

Maverick & Goose
The scene with all those shirtless flyboys engaged in the world’s most homoerotic game of beach volleyball (complete with Kenny Loggins’ “Playing With the Boys” on the soundtrack) might be the single gayest scene in a mainstream American action movie (and that is a high bar), but Top Gun director Tony Scott had us the moment Iceman (Val Kilmer) tells Maverick (Tom Cruise), “You can be my wingman any time.” You bet he can.

Cagney & Lacey
Network execs were worried about the show’s leads coming off as lesbian. Why worry? Why not celebrate a storyline that millions of fans were already imagining? If “lesbian” is synonymous with smart, strong, and funny, so much the better.

Geordi LaForge & Lt. Cmdr. Data
Kirk and Spock would be the obvious choice as the premiere gay couple in the Star Trek universe. There’s already tons of K/S fan fiction about their potential couplings. We’re more interested in the close friendship between the blind chief of engineering and the robot that yearns to be human. Good luck to Data trying to read between the lines of an OKCupid profile.

R2-D2 & C-3P0
One is fey, British, servile, and nearly hysterical most of the time. The other is indecipherable. Together, they help save the universe while proving that love doesn’t merely cross boundaries of gender, it escapes the human realm and crosses into the robotic one.

All of the Golden Girls
Why stick with a traditional monogamous marriage when you could have some sort of polyamorous domestic arrangement? These four ladies had all lost husbands or partners. They had all travelled down that road and back again. Their hearts were true. They were pals and confidants.

Beavis & Butt-head
The two dim-witted teens were never really nice to each other, but it’s hard to imagine either of them being with anyone else—as a friend, lover, or in any other way.

BONUS: Laverne & Shirley
We were reminded (on Twitter) that we had left out one crucial couple: Milwaukee bottlecappers Laverne De Fazio and Shirley Feeney. On your mark, get set, and go now. It’s a race to the altar.