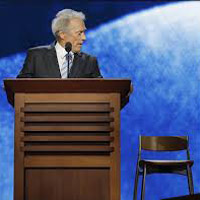 When Clint Eastwood launched into his empty chair bit at last night’s Republican National Convention, we thought it was a brave display from a man in the early stages of Alzheimer’s. Then it became clear this was deliberate. Dirty Harry was doing a bit. Not only was it one of the strangest pieces of political theater this country has seen in ages, it transformed an innocent piece of furniture into an internet sensation. (By this morning, @InvisibleObama had more than 50,000 followers.) It enters the upper echelons of furniture fame, although Clint’s prop may be the only chair that’s more famous for who didn’t sit in it. We rounded up a few of the country’s most famous chairs for their opinions of Clint’s shtick. Did it make their day?